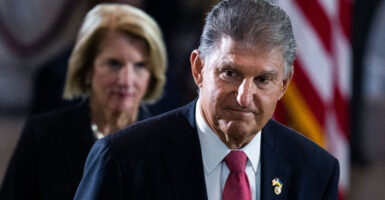 Sen. Joe Manchin, pictured paying respects to World War II veteran and Medal of Honor recipient Hershel "Woody" Williams in the Capitol Rotunda on July 14, has signed off on a massive tax and spending bill that would push prices for working families even higher.  (Photo: Tom Williams/Pool/Getty Images)

After more than a year of expressing his concerns about the impact of inflation, Sen. Joe Manchin, D-W.Va., has signed off on a massive tax and spending bill that only would push prices for working families even higher.

The deal, which Manchin made with Senate Majority Leader Chuck Schumer, D-N.Y., was reached only hours before the Department of Commerce announced that the economy shrank for the second quarter in a row, which most economists consider a recession.

With inflation hitting 9.1% in June, this is a stagflationary economy.  Inflation-adjusted wages for the average American worker have fallen by nearly $3,400 since President Joe Biden took office.

Inflation happens when too much money is chasing too few goods and services.  The government’s policies over the last two years have been a perfect recipe for the highest inflation in four decades: trillions of dollars in government spending financed by the Federal Reserve’s printing presses coupled with lockdowns, new regulations, a war on energy, and anti-work programs that drove down supply.

Biden’s $1.9 trillion American Rescue Plan Act, a stimulus spending bill in March 2021, proved to be the match that lit the inflationary fire.

Biden and his big-spending allies in Congress are now back for more.

The so-called Inflation Reduction Act of 2022, in reality, only would add to the inflationary pain families are already feeling thanks to hundreds of billions in new government spending and job- destroying tax hikes.

The legislation’s proponents will argue that over the next decade the bill’s higher taxes would offset the new spending and reduce budget deficits and thus inflationary pressures on net over the 2022 to 2031 budget window.

It is true that the recent massive deficits financed by the Federal Reserve and driven by excessive government spending have resulted in crippling inflation.

Unfortunately, the Inflation Reduction Act doubles down on the same irresponsible fiscal policy that has caused inflation: All of the new government spending is upfront, while the deficit-reducing revenues are backloaded.

The result would be higher short-term deficits and higher inflation. So, it is fitting that Section 1 of the bill, the misleading title, will be struck down by a point of order as extraneous for violating the reconciliation budget process’s Byrd Rule. The same point of order cut the title of the 2017 Tax Cuts and Jobs Act because every provision in a budget reconciliation bill must be directly related to changing fiscal outcomes.

In 2010, Manchin said, “I don’t think during a time of recession you mess with any of the taxes, or increase any taxes.”

But the legislation Manchin now supports reportedly would increase taxes by more than $450 billion over the next decade—climbing to three-quarters of a trillion dollars when the drug price controls that work like business taxes are counted.

Businesses would face a complicated new alternative minimum tax based on different accounting methods than are normally used for calculating taxes.  This would increase the tax burdens on employers even if they are following the tax laws already on the books.

The reality is that corporations—as in the buildings and logos often associated with them—can’t pay taxes. Only the workers inside corporations, the savers and investors who own their stock, and the customers who consume their goods and services can bear the burden of the higher tax.

Those ordinary Americans would be the ones who take home smaller paychecks, have smaller savings and retirement accounts, and who pay more for the products they buy. A National Bureau of Economic Research study, published in April 2020, found that the price increases after a corporate tax hike “are larger for lower-price items and products purchased by low-income households.”

The proposal also includes a new $78.9 billion slush fund for the Internal Revenue Service, allowing the agency that has dubious history of political corruption to add thousands of new agents with little accountability.

It would impose price controls on prescription drugs that would result in reduced access for patients in need. Obamacare subsidies would be expanded “temporarily,” sending billions of taxpayer dollars to insurance companies.

The Inflation Reduction Act would even advance the radical Green New Deal agenda, spending an astonishing $369 billion in the name of “decarbonizing all sectors of the economy.” Biden’s anti-fossil fuel policies have already cost us dearly, driving up prices.

However, these subsidies would have a far greater impact than this on-paper price tag implies. These $369 billion would be used to manipulate the market into shifting trillions of dollars of investment out of good productive uses and into these politically motivated green dead ends.

All of this on the heels of the Senate passing another massive $280 billion corporate welfare bill—paid for with more inflation, falling real incomes, and a further declining economy.

Americans are already hurting. To turn the tide on stagflation, Congress must first stop the spending.