Manchin-Schumer-Biden Taxes Would Hit Both Rich and Poor Americans 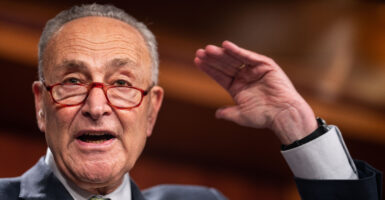 President Joe Biden promised on Thursday that the so-called Inflation Reduction Act wouldn’t raise taxes on Americans making less than $400,000 a year. But, in fact, the bill would increase taxes collected from the American people by more than half a trillion dollars, affecting both rich and poor alike.

The largest tax provision in the bill is a new corporate minimum tax. The Joint Committee on Taxation scored the corporate minimum tax as a $313 billion tax hike between 2023 and 2031. Separate government forecasts have projected that the $80 billion of additional funding directed to the IRS would increase tax collections by about $200 billion over the same period (or $120 billion on net).

Based on this author’s initial estimates, taxpayers with adjusted gross incomes below $75,000 would ultimately shoulder an estimated $136 billion of new revenues from the corporate minimum tax and the IRS enforcement provisions, or about 26% of the total. Indeed, the revenues would fall disproportionately hard on taxpayers making less than $25,000 per year.

While these low-income taxpayers account for only about 5% of total income in the economy, they would ultimately bear about 8% of the new tax collections. And of course, they are the least able to afford it.

About 66% of the taxes from these two provisions would fall on relatively high-income taxpayers earning more than $100,000 per year. Between 2023-2031, the average taxpayer in this category would face an estimated $10,883 of increased tax burden. Taxpayers earning $50,000-$100,000 would face about $2,431 of the burden, while those earning less than $50,000 would face about $1,009. The higher dollar amounts paid by high-income taxpayers are nearly proportional to the higher incomes and higher current levels of taxation of these taxpayers.

As a share of individual income, taxpayers earning less than $25,000 per year would bear the largest tax incidence, followed by taxpayers earning more than $100,000. The incidence of the tax on Americans with income between $25,000 and $100,000 would be somewhat lower, as captured by the U-shape of the chart above.

Much like the inflation tax now raging across the economy, the taxes in the Manchin-Schumer bill would be mostly indirect taxes on Americans. Like the hidden inflation tax, though, these taxes would inflict real harm.

U.S. corporations would technically pay the corporate minimum tax. But a brand can’t bear the weight of a tax, only people can. When corporations “pay” a tax, it ultimately mostly comes out of the pockets of workers in the form of lower real wages, even if it isn’t listed as an item of withholding on their pay stub. In fact, there is some reason to believe that low-income Americans are hurt the most by corporate taxes.

Shareholders—that is Americans with 401(k)s or other retirement investments—would bear the other portion of the corporate tax burden, though this incidence is reduced by investors’ ability to move their money into non-U.S. investments, which would not be subject to the new tax.

Barring an unlikely significant change in the composition of IRS enforcement, the stepped-up IRS enforcement would subject taxpayers across the income spectrum to more scrutiny and greater audit risk.

That’s to say nothing of sole proprietors, typically the smallest businesses. Sole proprietors face the greatest risk of audit adjustments, in part because cost constraints force many small business owners to handle their own books, and they struggle to navigate the convoluted U.S. tax code.

The Government Accountability Office director of strategic issues, James McTigue, gave recent testimony before Congress on the tax gap, suggesting that roughly 25% of the IRS’ new collections from expanded enforcement could come at the expense of sole proprietors.

Some argue that heightened tax enforcement should only be of concern to those who don’t pay their rightful amount of taxes. But there are many ambiguities in the tax code that lead to legitimate disagreements between taxpayers and the IRS.

A major expansion of IRS audits would be a concern for all businesses—very much including those who already pay their taxes conscientiously. The constant fear of an army of bureaucrats nitpicking their small business operations would push companies to dedicate more money and resources to tax accounting, audits, and legal fees, adding even further to overhead costs. This will only further drive down employees’ real wages and push up consumer prices.

Proponents of the bill have argued that American families wouldn’t face more taxes. Manchin told reporters, “There’s not one penny of change in taxes.”

This is clearly false, and government scorekeeping agrees.

Government estimates from the Joint Committee on Taxation also show that the incidence of the tax will fall on Americans across the income spectrum, but the lowest-income taxpayers would see the largest relative increase in their federal taxes. The Joint Committee’s estimates do not attempt to estimate the tax incidence of the increased IRS funding, though they do account for additional tax provisions, including the taxation of carried interest and the allowance of certain green tax credits.

As Americans struggle under the weight of inflation and a recession, adding hundreds of billions of dollars of wasteful federal spending and harmful taxes would be a huge mistake. And it’s a mistake that all Americans would pay for.