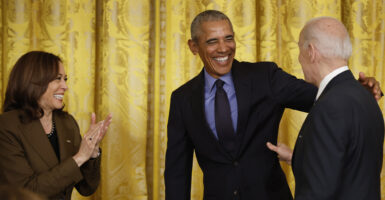 A recent analysis of federal health spending by the Congressional Budget Office suggests that allowing temporary expansions of Obamacare subsidies to expire in December would save taxpayers billions of dollars without reducing the number of those covered by individual health insurance.

Senate Democrats nevertheless seek to extend the expansion of Obamacare and salvage a few other provisions of President Joe Biden’s star-crossed Build Back Better spending bill.

Congress temporarily expanded those subsidies in the American Rescue Plan Act, a $1.9 trillion bill that has contributed to record inflation. Lawmakers argued that the pandemic required more generous Obamacare subsidies. Those subsidies are due to expire this December.

The latest Congressional Budget Office analysis of Obamacare cost and coverage effects suggests that extending the subsidies beyond December would cost taxpayers plenty. Letting the subsidies expire not only would save money but wouldn’t result in fewer Americans having individual health insurance coverage in 2023.

CBO estimates that with the enhanced Obamacare subsidies, 17 million Americans have individual health insurance policies in 2022. Of those, 14 million enrolled through health insurance exchanges, with the government subsidizing premiums for 12 million of them. The remaining 3 million bought insurance outside the exchanges.

For calendar year 2023, CBO estimates that 17 million—the same number as this year—will have individual coverage, even without the expanded subsidies.

According to the agency, the government will subsidize 2 million fewer people, but 2 million more will buy policies without taxpayer subsidies, leaving the number of those with individual coverage unchanged at 17 million.

Letting the subsidies expire in December would produce substantial federal savings. CBO expects those subsidies to cost the federal government $78 billion this fiscal year. Next fiscal year, when enhanced subsidies lapse, that amount would drop to $59 billion, about $19 billion less.

Some argue that insurance premiums would rise if Congress allows the expanded subsidies to lapse. That is categorically false.

Insurance companies set premiums for Obamacare policies. The government then determines whether those who enroll in exchange-based policies qualify for subsidies.

Without subsidy expansions, that family would pay $685 monthly, and taxpayers would kick in $715, but the insurance company would pocket the same $1,400 premium.

Enlarging the subsidies doesn’t reduce insurance premiums. Rather, it means that the insurer will take less money from the customer—who benefits from the coverage—and more from taxpayers, who do not.

It may seem counterintuitive that CBO assumes that letting subsidies return to pre-pandemic levels in 2023 won’t reduce the number of those covered by individual insurance. That’s because many Americans wrongly assume that most of the uninsured can’t afford coverage and aren’t eligible for government assistance.

That is not the case. CBO previously has estimated that three-fourths of the uninsured in 2019 had access to employer-sponsored insurance or government subsidies or were among the country’s highest earners.

Of an estimated 30 million uninsured, 5.5 million (19%) qualified for Obamacare subsidies; 5.1 million (17%) were eligible for coverage through Medicaid or the Children’s Health Insurance Program; 9.4 million (31%) had access to employer-sponsored insurance; and 2.6 million (9%) were in the top two income quintiles and, consequently, weren’t suitable candidates for government handouts.

That leaves a little over 7 million uninsured who were ineligible for subsidies and lacked the resources to buy insurance without them. Of these, 4 million were not lawfully present in the U.S. and therefore were disqualified from public assistance.

The remaining 3.2 million were low-income people who lived in states that did not expand Medicaid. Obamacare bars federal aid to that group.

Thus, of an estimated 269 million lawful U.S. residents under age 65 in 2019, only 3.2 million were uninsured, unable to afford coverage and without access to federal subsidies or employer-sponsored insurance.

Extending the pandemic-related increases in Obamacare subsidies won’t help those 3.2 million Americans. They would remain ineligible for premium subsidies.

An extension by Congress instead would send billions more in taxpayer money to insurance companies, largely on behalf of those who already have health insurance.

Expanding the Obamacare premium subsidies because of the pandemic was a bad idea. Doubling down on those expansions amid rampant inflation is an even worse one.