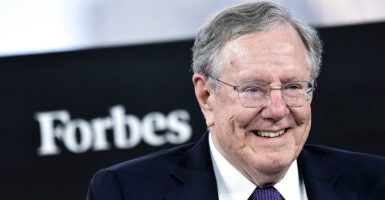 Steve Forbes—seen here at the 2019 Forbes Healthcare Summit at Lincoln Center in New York City on Dec. 5, 2019—spoke out against President Joe Biden's Build Back Better bill in Washington on Tuesday night. Senate Democrats are trying to revive it in pared-down form. (Photo: Steven Ferdman/Getty Images)

“Don’t call it an ideology. Call it an idiot-ology,” Steve Forbes says of President Joe Biden’s defeated Build Back Better economic plan, which Democrats in the Senate are now trying to revive.

Build Back Better is a multitrillion-dollar legislative package proposed by Biden consisting of massive spending on social, infrastructure, and environmental programs.

Forbes, the CEO of Forbes Media, spoke out against Build Back Better at a discussion of his new book “Inflation: What It Is, Why It’s Bad, and How to Fix It” in Washington on June 7.

Forbes addressed the Biden administration proposal, which includes raising marginal tax rates on corporations and other businesses. He compared the president’s logic to that of an 18th-century doctor: “To cure you, they bleed you, which got rid of pain and suffering—because it got rid of you.”

Preston Brashers, a senior analyst for tax policy at The Heritage Foundation, concurs, describing the Build Back Better bill as a “$3.5 trillion patchwork of taxes, mandates, job-killing regulations, and social welfare entitlements that will only exacerbate the supply-side issues plaguing the economy.” (The Daily Signal is the news outlet of The Heritage Foundation.)

Forbes also spoke out against the Biden administration’s “[electric vehicle] charging action plan,” which includes $7.5 billion in federal spending for a national EV charging network and a community grant program. He noted that governments around the world have spent $5 trillion on renewable energy over the past 20 years, but that has reduced the share of global energy supplies coming from fossil fuels by only 2 percentage points.

“Imagine what those resources could have done for … fighting disease,” he said.

Forbes concluded that “Republicans [in the Senate] did Biden a favor” by blocking the Build Back Better bill, which had passed the Democrat-controlled House in November on a straight party-line vote.

“If the bill had passed, you would have a far worse [economic] situation,” he said.

But now, Senate Democrats are attempting to craft a pared-down version of Build Back Better that they hope to pass through the reconciliation process with only Democratic senators’ votes.