The Road to Ruin Is Paved With Gimmicks 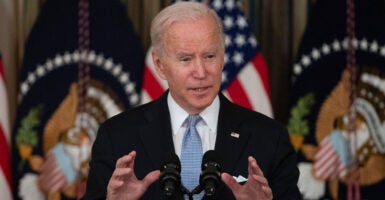 President Joe Biden, seen here Nov. 6 hailing the passage by Congress of his infrastructure bill, has his sights set on a massive tax-and-spend bill that will cost $4.6 trillion—about two and a half times his own reported estimate. (Photo: Roberto Schmidt /AFP/Getty Images)

At this very moment, President Joe Biden and Congress are engaged in yet another round of budget gimmickry with your wallet in mind.

Though congressional rules are usually dismissed as “inside baseball,” many of them are designed to safeguard Americans from abuses of government.

Biden has talked about his “Build Back Better” tax-and-spend bill as new, but let’s be clear: There’s nothing new about it. It’s the same old wealth redistribution that he has been pushing all along.

If fully implemented, the tax-and-spend bill would likely cost $4.6 trillion—roughly two and a half times his own reported estimate.

Imagine touring a house listed around $400,000 with a realtor. It fits into your budget and would make an excellent home for your family. Then, after you have signed all the paperwork, the bank issues you a mortgage on a million-dollar home. That’s precisely the bill of goods Biden is trying to sell the nation.

As a tool to bring the federal budget back on track, a reconciliation bill is allowed to bypass the Senate filibuster so that a simple majority in both the House and Senate can pass the bill.

So, if your goal is to enact permanent programs that would dramatically increase the size of the welfare state and the government’s climate-related micromanagement, reconciliation may not be for you.

Without the reconciliation tool, the tax-and-spend bill would have to face a 60-vote threshold in the Senate. Again, this threshold is designed to make sure a narrow majority cannot, on a whim, radically change the whole country.

Or, as Biden and congressional Democrats have been trying to do, you could use gimmicks to hide this wolf of a bill in the sheep’s clothing of reconciliation.

The House and Senate Budget committees have identified 17 programs that expire before the end of the budget window.

Do they really intend for these “transformational” new initiatives to be cancelled after just one year?

As with most congressional gimmicks, this is an old one: Create artificial cliffs to underreport the costs and force future votes on whether to extend some government benefit or to abruptly pull the rug out from under people.

This reminds us of the wisdom of Milton Friedman: “Nothing is so permanent as a temporary government program.”

The tactic is something of a long con: ensuring many hard votes in Congress provide many more opportunities to expand programs and entrench them more deeply.

In fact, the steady expansion of government has brought us to where nearly $4 out of every $10 of the goods and services produced by Americans are now redirected through a government program.

This is the destination where gimmicks lead: an ever-expanding government that consumes more and more of the fruits of all our hard work.

Perhaps the most egregious gimmick is Biden’s sleight of hand to insist government spending is a positive “investment.”

Before the government can build anything, it needs to take the concrete and steel and the workers who could have been employed elsewhere. The only way the government can invest is with money and resources taken destructively from somewhere else.

The truth these gimmicks attempt to obscure is that all government spending necessitates burdensome taxation or the crushing crowding out of a ballooning national debt.

This saps more than our material wealth. The less of our resources we control, the less control we each have over our own lives and endeavors. It’s an assault on the freedom and dignity of every American.

This bill, as with all dramatic expansions of government, demands that we each give up a little more of our labor, our freedom, and our belief in ourselves to an army of government bureaucrats.

All legislation is, implicitly, a statement of the values of its drafters. The tax-and-spend bill’s statement, broadcasted loud and clear, is that our problems are bigger than we can handle and that each of us is fundamentally incapable.

Devised with a process lacking transparency and bolstered by budget gimmicks, the tax-and-spend bill would add yet more miles to the road that leads to expanding government control.

For a quarter of the millennia, our nation has led the world to unprecedented gains in the quality of life and access to freedom. They are one and the same.

It’s through freedom that we build strong communities and that our innovators find the resources to make good on the promise of tomorrow. No amount of government micromanagement can replicate this delicate and vital process.

It’s the duty of every lawmaker to stop these abuses and to block more destructive expansions of government. Just because the drafters of the tax-and-spend bill have given up on the promise of what a free people can build, that doesn’t mean that the rest of us should as well.