The Problems With Cassidy Hutchinson’s Testimony 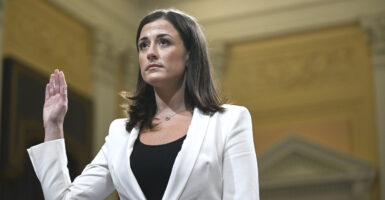 It’s nice to be back in London, though I’m sorry to report that my visit was occasioned by the funeral of an old and dear friend. (By “old friend” incidentally, I mean that we had been friends a long time, not that he was old.)

Such things—long-distance travel, mortality rendered up close and personal—tend to impart a sense of broader horizons and more meditative perspectives to our appreciation of events.

I think in this context of a beautiful, late poem by A.E. Housman. Toward the end, these lines occur:

The flesh will grieve on other bones than ours

Soon, and the soul will mourn in other breasts.

The troubles of our proud and angry dust

Are from eternity, and shall not fail.

Bear them we can, and if we can we must.

Housman is full of such melancholy observations, which are all the more melancholy for being true. One effect of such meditations is to render many pressing, everyday concerns distant and faintly comical.

Over the past several weeks, my inbox has been full of news about the preposterous “Jan. 6” show trial in Washington, D.C. I wrote about it here a couple of weeks ago.

The ostensible purpose of this exhibition of untrammeled state power is to get to the bottom of who and what precipitated the jamboree at the Capitol on Jan. 6, 2021.

The real purpose is to destroy Donald Trump, or at least render him unelectable in 2024.

Regular readers know that I believe that the events of that day were at least partly organized by, or with the connivance of, government agents.

I also believe that the response to the events of that day were wholly framed by a virulent, anti-Trump media bent on seducing the public into believing the incredible story that the unarmed protest at the Capitol was an “insurrection,” an assault on “our democracy” worse than 9/11, Pearl Harbor, even the Civil War.

You don’t have to travel 3,000 miles to understand that the Jan. 6 committee’s show trial, with soon-to-be-former Rep. Liz Cheney, R-Wyo., presiding, is a flop everywhere except Washington and in the imaginations of the anti-Trump media.

Most people across the country care about out-of-control inflation, soaring energy prices, and an economy that’s spiraling into recession or worse.

The anti-Trump obsessions of the deep-state apparatchiks and their media megaphones barely register. Which is why the Jan. 6 committee has resorted to increasingly desperate measures to exorcise its bête noir.

With dubious legal authority, the committee has enlisted the coercive power of the state—especially our newly energized Stasi, sometimes known as the FBI—to harass and intimidate anyone connected with Trump.

These goons have conducted dawn raids and sudden public arrests of a wide spectrum of Trump associates or supporters, clapping them in handcuffs and leg irons, confiscating their electronic devices and other personal property, and generally acting like the secret police of a totalitarian state.

What has happened these past weeks to such as Peter Navarro, Jeffrey Clark, and John Eastman should give us all pause.

Somehow, Cheney has been able to deploy the Stasi against her political opponents. Who gave her the authority to sic the FBI on Eastman?

Fox’s Tucker Carlson just aired a long list of victims of the regime.

It’s been a sobering show the committee members have put on, but somehow their investigation still lacked traction.

Then, just a few days ago, they resorted to desperate measures, just as the Democrats on the Senate Judiciary Committee did when their initial efforts to torpedo Brett Kavanaugh’s Supreme Court nomination was foundering.

Hutchinson, a former aide to Trump chief of staff Mark Meadows, was wheeled on stage a few days ago to paint a lurid picture of the president.

Cheney thought it so good that she gave Hutchinson a nice hug.

Among other things, Hutchinson reported that she had heard that Trump had assaulted members of his security detail.

She also said that she had heard that he lunged for his limo’s steering wheel, apparently in an effort to commandeer the car.

The spittle wasn’t dry on Hutchinson’s microphone before her story was refuted by diverse sources, including the Secret Service itself.

Outside the frenetic precincts of the anti-Trump brotherhood, Hutchinson’s story was instantly transformed into fodder for comedy.

As is common these days, The Babylon Bee had one of the best takes.

“Jan. 6 Committee Says,” a headline in the Bee roared, “Cassidy Hutchinson Told Them That She Heard Mark Meadows Say That A Secret Service Agent’s Friend’s Cousin’s Husband Once Heard That One Of Trump’s Other Aides Said She Thinks She Heard Him Say He Wanted To ‘Do An Insurrection.’”

Some anti-Trump commentators claim to have found Hutchinson’s testimony “devastating.”

I thought it was a preposterous, and probably coached, exercise in self-aggrandizing and mendacious melodrama.

We are not yet done making an inventory of her misstatements, circulation of hearsay, and utter fabrications.

For example, Hutchinson said that she had written a note about a possible Trump statement intended to stop the protest at the Capitol.

It turns out, however, that the note reportedly was written by Eric Herschmann, an attorney for Trump.

As John Daniel Davidson reports in a splendid piece for The Federalist: “The handwritten note that Cassidy Hutchinson testified was written by her was in fact written by Eric Herschmann on January 6, 2021.”

This via a spokesman for Herschmann himself: “All sources with direct knowledge and law enforcement have and will confirm that it was written by Mr. Herschmann.”

It used to be, when it was Trump or one of his surrogates who was being grilled, that the Latin principle of falsus in uno, falsus in omnibus would be strictly enforced. If someone lies about one thing, nothing else that he says can be regarded as credible. False in one thing, false in all things.

But Cheney has affirmed her absolute “confidence” in Hutchinson’s testimony.

Opinions differ about the merits of Cheney. I certainly do not credit her high opinion of the twisted testimony of Hutchinson.

In my view, Davidson got to the nub of the issue.

In “The Jan. 6 Committee Is Causing Never Trumpers To Lose Their Minds,” the Federalist column I cited above, Davidson notes that although Hutchinson, billed as a star witness, “did indeed make a number of explosive claims … The problem is that she didn’t actually witness anything.”

Indeed, as I noted above, Davidson writes: “Her hearsay claims were blown to pieces almost as soon as they appeared, in some cases because people with firsthand knowledge immediately came forward to dispute them, and in other cases because the claims themselves were ridiculous on their face.”

But Hutchinson, like Ford or Julie Swetnick (remember her?), is but a dispensable prop in Cheney’s disgusting efforts to subvert the rule of law by prosecuting her vendetta against Trump.

If anything, Hutchinson unwittingly confirmed that the Jan. 6 committee is a farcical show trial, the purpose of which is to criminalize political opposition to Democrat Party rule and advance the false narrative that President Trump is not just responsible for the Jan. 6 riot, but that he’s guilty of treason.

Come the midterm elections, the Jan. 6 committee will be gone or transfigured. Cheney will be cast into outer darkness, a place, as St. Matthew put it, of fletus et stridor dentium (weeping and gnashing of teeth).

This commentary, distributed by RealClearWire, originally appeared in The Epoch Times.