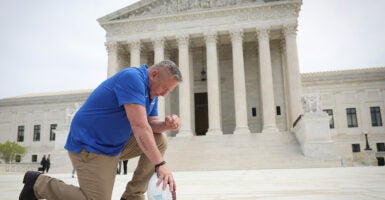 If the Founding Fathers who wrote the establishment clause also voted to pay for a chaplain to work for Congress, an assistant football coach at a public school can’t violate it by personally saying a prayer after a game. Pictured: Former assistant football coach Joe Kennedy takes a knee in front of the U.S. Supreme Court after his legal case was argued before the court on April 25 in Washington, D.C. (Photo: Win McNamee/Getty Images)

Did George Washington in his first act as president violate the first principle soon to be enshrined in the First Amendment?

Did the Congress that approved the First Amendment compel him to do so?

On April 7, 1789, three weeks before Washington was inaugurated, the Journal of the Senate reported that the Senate had ordered “a committee … to take under consideration the manner of electing Chaplains, and to confer thereupon with a committee of the House of Representatives.”

On April 15, 1789, the committee reported back: “That two Chaplains, of different denominations, be appointed to Congress, for the present session, the Senate to appoint one, and give notice thereof to the House of Representatives, who shall, thereupon, appoint the other; which Chaplains shall commence their services in the Houses that appoint them, but shall interchange weekly.”

Then, on April 25, 1789, the Journal of the Senate reported: “The Senate proceeded to the appointment of a Chaplain, in the manner agreed upon the 15th of April; and (t)he right reverend Samuel Provoost was elected.”

Two days after that, the House resolved: “That this House will, on Friday next, proceed by ballot to the appointment of a Chaplain to Congress on the part of this House.”

Two days after that, the House agreed to a resolution, already adopted by the Senate, that said: “That after the oath shall have been administered to the President, the Vice-President and members of the Senate, the Speaker and members of the House of Representatives, will accompany him to St. Paul’s Chapel to hear divine service performed by the Chaplains of Congress.”

The Congress was then meeting at Federal Hall in New York City.

On April 30, 1789, Washington stood on the balcony of that hall and was sworn in as this nation’s first president.

“Washington took the oath with his hand on the Bible, and kissed the Bible after taking the oath,” says the Mount Vernon website.

The Journal of the Senate includes the text of his inaugural address.

“[I]t would be peculiarly improper to omit, in this first official act,” said Washington, “my fervent supplications to that Almighty Being who rules over the universe—who presides in the councils of nations—and whose providential aids can supply every human defect, that his benediction may consecrate to the liberties and happiness of the people of the United States, a government instituted by themselves for these essential purposes: and may enable every instrument employed in its administration to execute with success, the functions allotted to his charge.

“In tendering this homage to the Great Author of every public and private good, I assure myself that it expresses your sentiments not less than my own; nor those of my fellow citizens at large, less than either,” Washington continued.

“No people can be bound to acknowledge and adore the invisible hand, which conducts the affairs of men, more than the people of the United States,” he said.

Washington then followed through on the resolution Congress had passed earlier that week.

“The President, the Vice President, the Senate, and House of Representatives,” reports the Journal of the Senate, “then proceeded to St. Paul’s Chapel, where divine service was performed by the Chaplain of Congress, after which the President was reconducted to his house by the committee appointed for that purpose.”

In 1983, the Supreme Court heard the case of Marsh v. Chambers. The issue then was whether the Nebraska state Legislature had violated the First Amendment and established a religion by having a chaplain begin its sessions with a prayer.

The court voted 6-3 that it had not. Chief Justice Warren Burger wrote the opinion for the majority. In this opinion, Burger pointed to the historical fact that the House and Senate first elected their chaplains in April 1789—and voted later that same year to pay them a salary.

“A statute providing for the payment of these chaplains was enacted into law on September 22, 1789,” he noted.

“On September 25, 1789, three days after Congress authorized the appointment of paid chaplains, final agreement was reached on the language of the Bill of Rights,” said Burger. “Clearly the men who wrote the First Amendment Religion Clauses did not view paid legislative chaplains and opening prayers as a violation of that Amendment, for the practice of opening sessions with prayer has continued without interruption ever since that early session of Congress.”

“It bears note,” said Burger, “that James Madison, one of the principal advocates of religious freedom in the Colonies and a drafter of the Establishment Clause … voted for the bill authorizing payment of the chaplains.”

The Supreme Court this week decided this question correctly. But three justices—Sonia Sotomayor, Elena Kagan and the retiring Stephen Breyer—voted the wrong way.

Which side would incoming Justice Ketanji Brown Jackson have taken?

We now live in a nation where fundamental rights remain just two or three votes shy of cancellation.