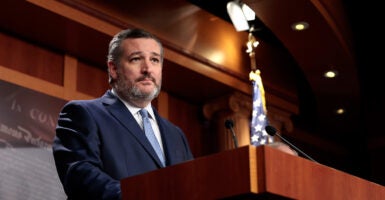 The Supreme Court’s decision in the Dobbs case, reversing Roe v. Wade, is nothing short of a massive victory for life, and it will save the lives of millions of innocent babies," says Sen. Ted Cruz. (Photo: Anna Moneymaker/ Getty Images)

On Friday, the Supreme Court overturned Roe v. Wade. Republican lawmakers and conservative leaders weighed in on the ruling.

Here are some of their responses:

“But even now that America’s pro-abortion legal regime is overturned, our work is far from over. We can and must do more for unborn children and their mothers.”

“The Supreme Court’s decision in the Dobbs case, reversing Roe v. Wade, is nothing short of a massive victory for life, and it will save the lives of millions of innocent babies. The decision reverses one of the most egregious departures from the Constitution and legal precedent the United States has ever seen, and one that has resulted in the deaths of 63 million American children.”

“Today, Life Won. By overturning Roe v. Wade, the Supreme Court of the United States has given the American people a new beginning for life, and I commend the Justices in the majority for having the courage of their convictions.”

“Today the Supreme Court, in line with modern science and overwhelming public consensus, recognized the truth in every mother’s heart and that pro-life advocates have argued all along: unborn children are human beings, deserving of protection. Every legislature in the land, in every single state and Congress, is now free to allow the will of the people to make its way into the law through our elected representatives.”

“Despite false claims from the left, this decision will not ban abortion. Instead, it returns the decision to the states and empowers state legislatures with more flexibility to craft policy through the democratic process.”

“It is unacceptable that a draft opinion was leaked in advance and that the person responsible has not been caught. The leaker has jeopardized the safety of our justices, and threats of violence by the radical militant mob are unacceptable. We appreciate the brave law enforcement officers working overtime to protect our justices and their families.”

“Since the Roe v. Wade ruling in 1973, 63 million lives have been lost due to legalized abortion. For nearly 50 years, pro-lifers have peacefully marched, prayed, and launched legal and political battles all aimed at reversing a decision that never should have been.

“As our Founding Fathers envisioned, everyone has a right to these inalienable rights: life, liberty, and the pursuit of happiness. The Supreme Court has finally corrected the wrong that is Roe v. Wade and we’re closer now to restoring our Founding Fathers’ vision of life.”

“The decision does not outlaw abortion, as some pro-abortionists contend.  But it is a significant departure from Roe in that the people, through their elected leaders, will guide how each state approaches abortion, rather than a nationwide policy set by unelected judges.  As we move forward as a nation, I believe greater attention should be paid to the needs of pregnant women and their babies.

“I am so very proud that Mississippi has had a leading role in overturning Roe v. Wade, and I will continue to pray for God’s guidance over the Supreme Court and all policymakers who will now take up the abortion issue across the country.”

“ROE IS GONE. FINALLY. The Court met the moment and made history, correcting the most egregious judicial distortion of the Constitution in living memory. Finally, an issue that the Court had taken away from the people has now been returned to them. No more false history. No more pompous preening about the Court’s ‘legitimacy’ instead of admitting a mistake. No more indecipherable, half-baked ‘undue burden’ standard. No more pretending that the unborn have no rights that the people are allowed to protect.”

“Today’s ruling is the culmination of decades of public advocacy, of unheralded acts of love and mercy, and of unrelenting prayers for justice for the unborn and their mothers. It will be remembered and celebrated as one of the most important days in the history of this country – a day when we began to right the wrongs inflicted by the Court in Roe v. Wade a half-century ago.

“Today’s decision is a crowning achievement of the conservative legal movement. Justice [Samuel] Alito and the other four members of the majority—Justices [Clarence] Thomas, [Neil] Gorsuch, [Brett] Kavanaugh, and [Amy Coney] Barrett— deserve ardent praise for their fidelity to the Constitution and for their courage. The majority opinion is a masterful repudiation of the lawlessness of Roe and Casey and a reaffirmation of the fundamental principles of our Constitution.”

“An unborn child now has a fighting chance at life. This is a great day of joy — especially for us in the black community, as abortion is the number-one killer of black Americans,”
“As stated in the Declaration of Independence, we have the right to life. Today, those words ring truer for the unborn.”

“We must now defund the racist baby chop-shop known as Planned Parenthood, and use that funding to support life-affirming pregnancy centers,”