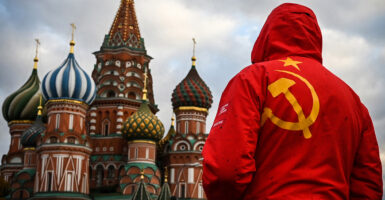 The new Victims of Communism Museum in Washington, D.C., challenges visitors to grapple with the deadly toll of communism and honor both those who were killed by and those who survived communist regimes. Pictured: A man wearing a jacket bearing the image of the Soviet national flag stands in front of St. Basil's Cathedral in Red Square in Moscow on Nov. 6, 2020. (Photo: Alexander Nemenov/Getty Images)

In the heart of Washington, D.C., behind the doors of a building not unlike the others with which it shares a block, lies a most visceral testament to the horrors of communism—a political ideology still all too dominant in the world today.

The new museum, from the Victims of Communism Memorial Foundation, has been in the works for many years. It opened to the public on Monday.

Entering it is like walking into a vault. Or possibly a tomb. Passing by a wall with large, embossed words reading, “REMEMBERING the victims of Communism,” the space quickly darkens and narrows.

Pictures and small video screens containing images of regimes and victims alike emblazon it, evoking a somber tone. Beyond those images, on a larger screen, a six-minute film lays out the rise of Vladimir Lenin and the Soviet Union as a communist power.

The room then funnels visitors into the world of the gulag. Here, there are artifacts from the notorious Soviet prison camps, physical remnants of the millions of Russians who passed through them. In one case sits a teddy bear and next to it a “valenki”—a felt boot that shod gulag prisoners.

There’s also a replica of “black bread,” an oblong, charcoal-colored loaf that gulag prisoners relied on for sustenance. Small measurements show how much of a loaf would be doled out as rations to each prisoner, depending on their docility or misbehavior.

An informational panel explains how Josef Stalin, the longest reigning leader of the Soviet Union, intentionally used a famine to starve more than 3 million Ukrainians in 1932 and 1933. Some estimate the death toll reached 7 million.

In total, the museum estimates, more than 100 million have been killed under communist regimes in the past 100 years.

On one wall runs a film, a slideshow of simple, hand-drawn images depicting the hardship of life in gulags, prisons, and work camps from communist regimes around the world. The images were etched by the survivors. Testimonies of what other survivors witnessed while imprisoned are read aloud as the images scroll.

“Every case where [communism] has been tried, it leads to mass atrocities,” Ambassador Andrew Bremberg, the president and CEO of the Victims of Communism Memorial Foundation, told me. “Truly, the worst examples of human suffering in history in terms of the most brutal, mass-murdering regimes.”

A broader scope of the suffering is played out in the museum’s largest space. There, a film animates the history of communism’s spread across the globe, detailing which nations fell to it. In one corner, the number of fatalities under communism, as well as those subjugated by it, rolls ever upward.

Informational panels throughout the museum detail specific atrocities, such as Pol Pot’s genocide of the Cambodian people, which wiped out 25% of the population of the Southeast Asian nation, and Mao Zedong’s failure in collectivizing China’s agriculture, resulting in a famine that killed anywhere from 20 million to 43 million people.

Juxtaposed to those are stories—written out and accompanied by photographs—of resistance to communism, ranging from peaceful demonstrations to armed uprisings: the Hungarian Revolution of 1956, the Prague Spring of 1968, and the Tiananmen Square massacre of 1989 in Beijing, to name a few.

Bremberg said that the former two examples, while lesser known, are of equal importance to Tiananmen Square.

He also cited a statistic woven throughout the museum: 1.5 billion. That’s the estimated number of people still living under communism. The largest communist nation today is China, accounting for the vast majority of that number.

The Chinese Communist Party, which rules over the country, has subjugated more than 1 million Uyghur Muslims, an ethnic minority, to reeducation camps, forced sterilization and abortions, forced labor, and surveillance. It’s genocide on an industrial scale.

Last year, the Victims of Communism Memorial Foundation received a series of leaked internal documents belonging to the Chinese Communist Party. The findings offer damning evidence of its coordinated efforts against the Uyghurs. You can learn more about them here.

Several nations formerly under communist control, such as Poland, also have museums recounting their own stories of existence under communism. None, however, offer a singular snapshot of its global impact like the new one in Washington.

“There’s nothing like this in the world,” Bremberg said. “It’s extremely important to have this in our nation’s capital. We have millions of tourists, particularly school groups, that come through that really need to learn this, because communism is a horrible evil.”

Although research has shown that up to 1 in 3 millennials view communism favorably, Bremberg thinks it’s the failure to explain the legacy of the ideology—certainly not life under such an ideology—that has given it such an appeal.

“What we’re really trying to do is put the face of the victims of communism forward as a way of educating people,” Bremberg said. “You can draw a pretty obvious conclusion that this is a horrible system of government.”

“[It’s] the scourge of the 20th century, and unfortunately still with us in the 21st century,” he added. “If we want to prevent that from costing untold lives in the future, people need to learn about the crimes of communism … through the experience of its victims.”

Adjacent to the museum’s exit stands a wall visitors pass by before leaving. It’s covered in a patchwork of portraits—the faces of those who have fought back against communism.

Amid the portraits, there are two simple words: “Remember us.” 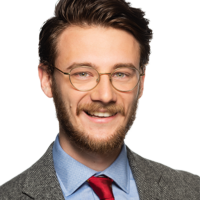