30 Years in Making, Museum Dedicated to Victims of Communism Opens in Washington 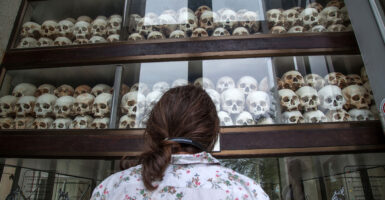 A new museum dedicated to the victims of communism worldwide was dedicated on Wednesday in Washington. Pictured: A Cambodian woman on Aug. 6, 2014, examines some of the thousands of skulls on display in Phnom Penh, Cambodia, of those killed during the 1970s "Killing Fields"-era by Pol Pot's communist regime. (Photo: Omar Havana/Getty Images)

Those were the two numbers emphasized at the dedication on Wednesday of the new Victims of Communism Museum in Washington, D.C., which I was privileged to attend along with my family.

The museum has been more than 30 years in the making, starting with an idea from Anne Edwards, the wife of Lee Edwards, the prolific author, historian, biographer, and scholar at The Heritage Foundation who was the driving force behind the creation of the museum.

Lee Edwards, the chairman emeritus of the Victims of Communism Memorial Foundation, received the foundation’s annual Truman-Reagan Medal of Freedom at the grand opening for all of the work he has done, not only to bring the museum to fruition, but to help the victims of communism all over the world. The man at the podium is Ambassador Andrew Bremberg, president of the Victims of Communism Museum.

The attendees at the dedication were not the usual Washington crowd.  The museum was full of individuals and families who not only fought against those murderous regimes, but helped lead the opposition. It included Wang Dan and Jianli Yang, who were student leaders in Tiananmen Square in 1989, when the Chinese army brutally killed more than 2,000 peaceful protesters who wanted democracy and freedom in China.

There are artifacts from that protest in the museum, including some of the handmade freedom flags of the students.

There were also families of the freedom fighters who staged the first revolt against the Soviet Union in 1956 in Hungary, when NATO and the Allies simply stood by, ignoring their pleas for help as Russian tanks crushed the rebellion and ruthlessly arrested and killed everyone involved.

As I watched a video of the fighting in the streets of Budapest that’s in the museum, all I could think about was what a difference it would have made if those Hungarian patriots had been equipped with Javelin missiles and had destroyed the Soviet tank armadas the way the Ukrainians are doing today.

My own father was a White Russian officer who fought the Bolsheviks in the Russian civil war.

In addition to remarks by Bremberg and Elizabeth Spalding, the president and a director, respectively, of the new museum, there were also speeches by Szabolcs Takacs, the Hungarian ambassador to the U.S., and professor Piotr Glinski, the deputy prime minister of Poland.

The presentations by the ambassador and the deputy prime minister were especially poignant, because they spoke from experience and know vividly and personally the evils of that vicious, deadly ideology. And that is exactly what communism is—an evil—as Glinski said repeatedly, contrary to the ignorant beliefs of the Marxist fools who inhabit too many of our academic institutions today.

Some of the most moving artifacts in the museum are a series of paintings that I first wrote about more than a decade ago, and which finally have a home where they can be permanently displayed.

In 1953, a Ukrainian painter, Nikolai Getman, was released from the Soviet gulag, where he had spent eight years for being present at a meeting where someone had drawn a caricature of Josef Stalin.

The paintings were smuggled out of Russia in 1997 because Getman was afraid the post-Soviet Russian government would destroy them to hide a past it pretends never existed.

The paintings are haunting. They are the only visual counterpart to Aleksandr Solzhenitsyn’s writings, which exposed this terrible system of mass imprisonment that Robert Conquest has rightly called “unexampled coldblooded inhumanity.”

The only difference between the Holocaust and the gulag is that the Soviet communists never got around to using gas to kill their prisoners—just old-fashioned bullets, beatings, starvation, and literally working them to death.

Getman’s stark paintings cover everything from the transportation of prisoners to the camps in unheated trucks and ships to the horrible and almost unspeakable living conditions in the gulag.

We see the routine brutality with which prisoners were treated. The fragile existence they led is captured in Getman’s paintings, which represent an enormous accomplishment, considering that all of the scenes were painted from memory.

One painting shows the despairing faces of a group of men taken from their barracks in the middle of the night and executed by the NKVD (the forerunner of the KGB), the secret police organization that ran the entire gulag system.

These kinds of executions occurred constantly and for no apparent reason. All of the prisoners knew that if you were taken out of your barracks in the middle of the night, you never came back.

And that’s happening today in places such as China, where the communist government has set up a gulag-type concentration camp system for the Uyghurs. There are millions of current victims being repressed, tortured, and killed in a country that big American companies, such as Nike and Apple, routinely do business in with no concern.

Raising money for the museum has been a long, hard task.  Yet countries like Poland, Hungary, Estonia, Lithuania, and Latvia all contributed money to help establish this very important museum. And as I noted, there were speakers at the dedication ceremony from some of those countries.

Who was absent, and who hasn’t contributed a single cent? The U.S. government and the current administration. Representatives of the country that has been the leader of the free world, which led the fight against communist dictatorships starting with the hot war in Korea and during the 40 years of the Cold War, were nowhere to be seen on Wednesday.

The Victims of Communism Museum has long been needed. And every student in every college and university who thinks Marxism, communism, and socialism (which is just communism under another name) is a wonderful idea should pay a visit to this museum to understand what that evil ideology has imposed on the world.

So, remember: 100 million and 1.5 billion. We not only have a lot to remember; we still have a lot to do to bring the flame of liberty to the enslaved people of the world.