We Must Never Forget the 100 Million Victims of Communism 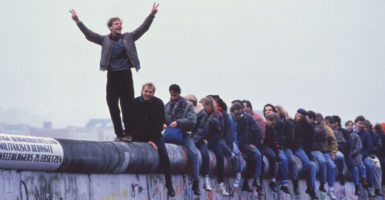 West Germans celebrate the unification of Berlin atop the Berlin Wall during the collapse of Communism in East Berlin on Nov. 12, 1989. East German border guards shot 77 people who tried to escape to the West over the wall during the course of its existence. (Photo: Stephen Jaffe/Getty Images)

You know you’re doing the right thing when your enemies condemn you.

When President George W. Bush 13 years ago on June 12, 2007, dedicated a U.S. memorial in Washington, D.C., to the more than 100 million victims of communism, both the Chinese communists and the Russian communists immediately attacked the president and the Victims of Communism Memorial Foundation.

The Chinese Embassy in Washington dismissed the memorial as “an attempt to defame China.” Gennady Zyuganov, the head of the Russian Communist Party, called the memorial “clumsy propaganda” intended to divert the world’s attention “from the true bloody crimes of U.S. imperialism.”

Tellingly, what neither the Chinese communists nor the Russian communist boss tried to do was to deny the bloody crimes of communist imperialism. After stating that “we the living have a solemn obligation to the victims to acknowledge their sacrifice and honor their memory,” Bush listed some of communism’s victims:

They include innocent Ukrainians starved to death in Stalin’s Great Famine or Russians killed in Stalin’s purges; Lithuanians and Latvians and Estonians loaded on cattle cars and deported to Arctic death camps of Soviet communism.

They include Chinese killed in the Great Leap Forward and the Cultural Revolution; Cambodians slain in Pol Pot’s Killing Fields; East Germans shot attempting to scale the Berlin Wall in order to make it to freedom; Poles massacred in the Katyn Forest and Ethiopians slaughtered in the “Red Terror”; Miskito Indians murdered by Nicaragua’s Sandinista dictatorship; and Cuban balseros who drowned escaping tyranny.

Since the dedication of the memorial 13 years ago, national leaders from around the world have visited the site to lay a wreath and offer a silent prayer. Ethnic groups from every continent have held rallies and candlelight ceremonies for their fallen brethren.

Each June, representatives of more than 20 foreign embassies and dozens of anti-communist organizations have participated in a memorial service, recommitting themselves to the words at the base of the memorial: “To the Freedom and Independence of all Captive Peoples and Nations.”

All freedom-loving people are encouraged to join a virtual memorial ceremony at 9 a.m. on Friday, June 12, at victimsofcommunism.org.

Each June brings the world closer to that day when communism finally will be dumped on the ash heap of history, and freedom will take its place in the five countries that still groan under communist dictatorship—China, North Korea, Vietnam, Laos, and Cuba.

How can we be sure that day will come? We remember the words of the East German communist boss Erich Honecker, who boasted in January 1989 that the Berlin Wall would stand for at least another 100 years. Before the year was out, the Berlin Wall had fallen, and Honecker was under house arrest.

Each June, those in attendance at the Victims of Communism Memorial ceremony pledge that never again will they allow so evil a tyranny to enslave peoples and nations.

They hear the voices of the fallen crying out, “Remember us,” and vow they will never forget them.