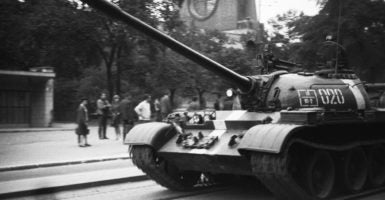 A 1968 photo from the Prague Spring. (Photo: Rooney Christopher/ZUMA Press/Newscom)

Tuesday marked 50 years since the Soviet Union—along with troops from the Warsaw Pact nations—on Aug. 21, 1968, invaded Czechoslovakia to crush the period of political liberalization that became known as the Prague Spring.

Reflecting on this sullen anniversary, we remember the bravery of the people of Czechoslovakia—now, the nations of the Czech Republic and Slovakia—in August 1968.

In addition, we call to mind the reality that 50 years later, Russia continues to illegally occupy territory in Georgia, Moldova, and Ukraine.

During World War II, the Soviet Union occupied Czechoslovakia, and in 1948, orchestrated the seizure of power by the Communist Party of Czechoslovakia. The communist leadership repressed media freedom and civil liberties, and imprisoned political dissidents.

The poor economic performance of the nation’s command-and-control economy in the early 1960s led to economic reforms beginning in 1965. The “New Economic Model,” a reform program, scaled back central planning in the economy and introduced limited incentives for increased individual production and creation.

Although initially supported by Moscow, Dubcek ushered in reforms, including the removal of state controls over industry, allowing greater freedom of assembly, religion, and speech, and abolishing state press censorship.

Dubcek famously stated his reforms would offer “socialism with a human face.” These reforms set off a period of liberalization in Czechoslovakia that would become known as the Prague Spring.

The newfound freedoms led to increased awareness of the corruption, economic misery, and violent repressions carried out by the ruling Communist Party of Czechoslovakia—which fueled increased calls for political transformation.

The invasion killed 137 people and injured more than 500, and snuffed out freedom from Soviet domination until the Velvet Revolution, which ended communist rule more than two decades later.

“The tragic news from Czechoslovakia shocks the conscience of the world. The Soviet Union and its allies have invaded a defenseless country to stamp out a resurgence of ordinary human freedom,” President Lyndon Johnson said in a statement. “It is a sad commentary on the Communist mind that a sign of liberty in Czechoslovakia is deemed a fundamental threat to the security of the Soviet system.”

As we reflect upon the Prague Spring and the Soviet invasion, it is important to note that many of the same themes of 1968 can today be seen in Georgia, Moldova, and Ukraine. In each of these nations, Russia continues to illegally occupy significant swaths of their sovereign territory.

In Georgia, Russia occupies 20 percent of the nation, basing 7,000 troops in the breakaway regions of Abkhazia and South Ossetia and regularly expands its annexed territory through a “creeping” annexation, in which the Georgia border is moved consistently further and further into areas controlled by the Georgian government.

In Moldova, Russia supports the breakaway enclave of Transnistria with Russian troops and helps propagate a festering conflict, which is to Moscow’s liking.

In Ukraine, Russia continues to occupy illegally annexed Crimea, represses political and religious freedoms on the peninsula, and actively supports a war in eastern Ukraine, which continues daily, costing more than 10,300 lives since 2014.

Fifty years after the Soviet invasion of Czechoslovakia, as we remember the brave men and women who gave their lives seeking freedom, we should also recall that today, in Europe, Russian irredentism continues to suppress the voices of those people in occupied portions of Georgia, Moldova, and Ukraine who are yearning to be free.