Soros’ Claim About Progressive (aka Rogue) Prosecutors Is Big Lie 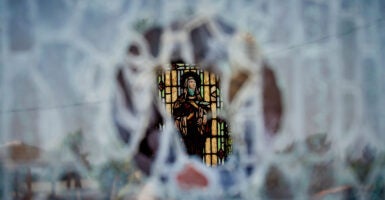 A stained-glass window is seen through a broken window at Sacred Heart Catholic Church in Jurupa Valley, California, on May 7, after the church was vandalized. (Photo: Watchara Phomicinda/MediaNews Group/The Press-Enterprise/ Getty Images)

The case could overturn Roe v. Wade, which made abortion restrictions illegal.

In response, a group of conservative leaders sent a letter to Attorney General Merrick Garland and Kristen Clarke, assistant attorney general for civil rights, requesting that they address the recent wave of attacks on pregnancy resource centers and churches.

“The severity of the situation calls for your leadership. This continued assault on religious and pro-life groups because of their beliefs is a manifest injustice that requires prompt, comprehensive, and public response,” the letter states.

The letter signers noted that these attacks had been occurring for a while, even before the Dobbs decision leak, but that they have recently “intensified.” They write:

Since May 2020 over 130 incidents have occurred across 29 states and the District of Columbia at Catholic properties alone. Incidents include arson, statues beheaded, limbs cut, smashed, and painted, gravestones defaced with swastikas and anti-Catholic language and American flags next to them burned, and other destruction and vandalism. A number of these incidents appeared to express hostility toward the Catholic Church because of its beliefs on the sanctity of life in the womb.

The letter calls on the Justice Department to investigate and take measures to stop the violence.

“We call on you to publicly condemn these unlawful attacks; to commit to vigorous efforts to prevent them, and to investigate and prosecute them; and to proactively engage with the affected faith communities to ensure their concerns and security needs are being met,” the letter reads.

Signers of the letter include Brian Burch, president of Catholic Vote; Tony Perkins, president of the Family Research Council; Jeanne Mancini, president of the March for Life Education and Defense Fund; and Ben Carson, former secretary of the Department of Housing and Urban Development and chairman of the American Cornerstone Institute.

Since the Supreme Court leak, there’s been an escalating wave of attacks on pregnancy centers and pro-life organizations that’s received little media coverage.

According to a report by The Washington Stand, the news site of Family Research Council, there have been “at least 41 separate incidents of violent attacks against churches, pro-life organizations, and pro-life property across the country since the May 2 leak of a draft Supreme Court decision in Dobbs v. Jackson Women’s Health Organization.”

The radical pro-abortion group Jane’s Revenge took credit for recent vandalism and arson and said it would continue acts of violence.

“From here forward, any anti-choice group who closes their doors, and stops operating will no longer be a target. But until you do, it’s open season, and we know where your operations are,” the group said in a letter.

“If you’re in the D.C. metro area, join us. Our protests at Barrett’s home moved the needle to this coverage. Falls Church is a People of Praise stronghold. She sends her seven kids to a People of Praise school that she sat on the Board of Directors for. She attends church DAILY,” the organization said in a tweet.

Protests at Supreme Court justices’ houses have been frequent since the leak of the Dobbs draft.

Washington Post columnist Kathleen Parker wrote about how the escalating attacks have been ignored by most media and that President Joe Biden and the administration have done shamefully little to stop or at least condemn it.

The issue should be especially concerning given the recent alleged attempt by a pro-abortion activist to assassinate Justice Brett Kavanaugh, she noted.

“If you go looking for stories about this or that bombing, you’re likely to find them only in religious news outlets, such as the Catholic News Agency or Get Religion,” Parker wrote, adding, “Despite these attacks—and the alleged attempted assassination of Kavanaugh—President Biden hasn’t been moved to condemn them.”

Parker wrote that Biden had plenty of chances to condemn the violence, but instead delegated the responsibility to White House press secretary Karine Jean-Pierre, who merely condemned all violence.

When House Speaker Nancy Pelosi was asked about the violence and rhetoric surrounding the abortion debate, she only elaborated on her pro-abortion views.