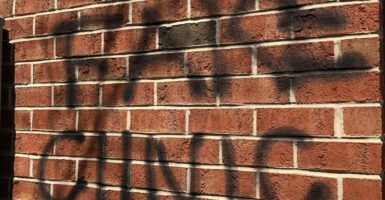 The words "Fake Clinic" are spray-painted on the brick exterior of First Care Women’s Health, a pregnancy center in Manassas, Virginia. “We are here in the trenches and ministering to moms and dads that don’t know what to do, but they don’t want to terminate a pregnancy,” center head Becky Sheetz says. (Photo courtesy of LifeFirst)

A vandal or vandals painted pro-abortion graffiti on a pro-life pregnancy center over the weekend in Northern Virginia, about 32 miles from the nation’s capital.

Employees of First Care Women’s Health in Manassas discovered the graffiti as they entered the building Monday morning, Becky Sheetz, CEO of the nonprofit Christian ministry Life First, which operates the center, told The Daily Signal.

Someone painted “Liars” on the door to the building and the words “Abortion is a Right” and “Fake Clinic” on the facade.

“We notified police. We have no idea who it was,” Sheetz said in a phone interview. “We were more concerned [about] the safety of our workforce and the women who get free pregnancy services than we are thinking about prosecution.”

First Care Women’s Health was vandalized as protests, and in some cases violence and threats of violence, erupted in the days since a leaked draft opinion from the Supreme Court on May 2 suggested that the justices would overturn the 1973 Roe v. Wade decision legalizing abortion on demand across the nation.

Someone threw a Molotov cocktail into a pro-life pregnancy center in Wisconsin on Sunday.

“We are here in the trenches and ministering to moms and dads that don’t know what to do, but they don’t want to terminate a pregnancy,” Sheetz said. “We are here to love them and tell them the truth.”

“People aren’t going to scare us out of our work,” she said, adding: “God’s word [warns us to] expect discomfort at persecution.”

Sheetz said the two pregnancy centers have received bomb threats over the phone as well as phony internet reviews from people who never visited one of the centers, but never before faced a physical threat such as this.

She said she does have some concern, particularly after violence toward a pro-life organization in Madison, Wisconsin.

“This is a spiritual battle. Life is the issue of our time,” she said, asserting that one court decision won’t change the demands of the abortion industry and its advocates:

The abortion industry benefits from more abortions. We don’t make money. What’s the threat of speaking with clients to inform them to consider contacting the father [of the unborn child], or to rely on their sister, or maybe their parents will support them, that maybe it’s not that they are all alone and isolated? What is the danger of a mother being fully informed? Yes, we have a perspective that all life is sacred. But we are here for her no matter what she decides.

The pregnancy center in Manassas runs an abortion recovery program for women who have had abortions.

“We see women all the time who have had past abortions and they say they can’t do that again,” Sheetz said. “Women have told us, ‘If I knew … a place like this existed before, I never would have had an abortion.’”