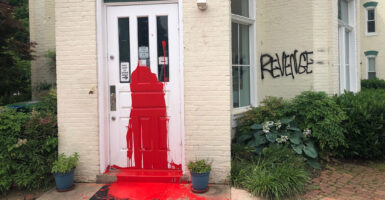 The Washington Stand has found that there have been at least 41 separate incidents of violent attacks against churches, pro-life organizations, and pro-life property across the country since the May 2 leak of a draft Supreme Court decision in Dobbs v. Jackson Women’s Health Organization that indicated the overturning of Roe v. Wade.

These attacks include arson, vandalism, property theft, and property destruction.

These incidents do not include at least nine other occurrences of physical violence against pro-life advocates, threats of violence against churches, and illegal disruptions of church services that have unfolded within the same time frame.

In the same time period, there has been a single instance of violence against pro-abortion advocacy groups, in which a woman is suspected of committing arson at an abortion facility under construction on May 25 in Wyoming.

Despite the wide disparity in violent incidents between the two groups, the U.S. Department of Homeland Security issued a “Terrorism Threat” advisory bulletin on June 7 that appeared to equate the amount of violent incidents from activists on both sides of the abortion issue. It stated, in part, “…individuals who advocate both for and against abortion have, on public forums, encouraged violence … .”

The recent spike in attacks against churches and pro-life organizations is part of a wider pattern of violence that has seen a marked uptick in the past two years. The U.S. Conference of Catholic Bishops released a report in early June that catalogued “at least 139 incidents … across 35 states and the District of Columbia since May 2020” against Catholic churches and organizations, including “arson, statues beheaded, limbs cut, smashed, and painted, gravestones defaced with swastikas and anti-Catholic language and American flags next to them burned, and other destruction and vandalism.”

“For the last 49 years—each time the pro-life movement had encountered an uncertain future, whether it be the future of an unexpectedly pregnant mom or of Supreme Court decisions, the movement has responded with an outpouring of love, resources, and prayer,” said Mary Szoch, director of the Family Research Council’s Center for Human Dignity.

For the pro-abortion industry, the exact opposite is true. Their solution to uncertainty about a mother’s future has always been violence and destruction in the sacred space of the mother’s womb. It is not surprising that now that the pro-abortion movement is facing uncertainty of the future decision of the Supreme Court, their response is once again violence.

“The pro-life movement must continue to respond with love, prayer, and support for men, women, and babies in need,” Szoch concluded.

In a sign indicating that cooler heads may be prevailing amongst some pro-abortion activist groups, the Washington Examiner reported on Wednesday that the pro-abortion extremist group Ruth Sent Us shut down its website that had included the home addresses of multiple Supreme Court justices. Its move followed shortly after news broke that an armed man was arrested outside of Justice Brett Kavanaugh’s residence, who police say had the intent to assassinate Kavanaugh.

The noteworthy move stands in stark contrast to the actions of other progressive organizations that have refused to take down online content that aided violent extremists. Following revelations that the domestic terrorist who shot and wounded the building manager at the Family Research Council’s headquarters in 2012 had used information from the Southern Poverty Law Center’s “Hate Map” to carry out his plan to kill everyone in the building, the center refused to take the information down from its website, where it remains today.