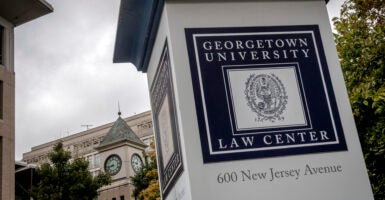 Georgetown law professor Ilya Shapiro resigned less than a week after being reinstated by the school.

Georgetown Law School placed the constitutional scholar on administrative leave and subjected him to a four-month “investigation” over a tweet.

The tweet, which Shapiro deleted and called “inartful,” opposed the idea that a Supreme Court justice should be chosen by their race.

Shapiro, who previously worked at the libertarian Cato Institute, explained why he believed his job at Georgetown Law was “untenable” in an article for The Wall Street Journal.

His full resignation letter to Georgetown Law can be read here.

Specifically, Shapiro wrote that a report from the Office of Institutional Diversity, Equity, and Affirmative Action he received after being reinstated confirmed that he needed to leave.

Instead of clearing Shapiro’s name and actually committing to free speech, Georgetown Law said he’d be reinstated on a technicality (the offending tweet was a few days before his employment). The school then said it would effectively be watching him for wrongthink.

“Dean William Treanor cleared me on the technicality that I wasn’t an employee when I tweeted, but the [Office of Institutional Diversity, Equity, and Affirmative Action] implicitly repealed Georgetown’s Speech and Expression Policy and set me up for discipline the next time I transgress progressive orthodoxy. Instead of participating in that slow-motion firing, I’m resigning,” Shapiro wrote.

Shapiro noted that the Office of Institutional Diversity, Equity, and Affirmative Action made it clear that its policies would be far from objective. The report said essentially that if Shapiro made any statement in which people were offended—or said they were offended—he would be considered in violation of its policies, regardless of his intent.

Here are a few examples Shapiro gave that could lead to him being in violation of the school’s new rules.

What’s worse is that Shapiro would be a target in an environment in which the primary professional and social currency is to be an aggrieved victim.

John Malcolm, the vice president of the Institute for Constitutional Government at The Heritage Foundation, said in a statement to The Daily Signal that Shapiro is correct in his decision to step away from Georgetown Law:

After being reinstated to the faculty based on a technicality by Georgetown Law School, Ilya Shapiro has wisely decided to resign because of the hostile work environment the school has created, especially for conservatives and libertarians and anyone else who says anything that offends the liberal zeitgeist that prevails on campus.

While Georgetown may talk the talk about free speech and the robust exchange of ideas, they clearly do not walk the walk. In his resignation letter, Shapiro said that the Dean had put a target on his back and set him up for failure (and additional undeserved ridicule). He is absolutely correct. We at Heritage look forward to continuing to work with Ilya in the future, and look forward to hearing about his next endeavor.

There is an immense double standard for how people on the right and left are treated in higher education. Georgetown might be an extreme example, but it’s far from alone. Our universities are of, by, and for the left, a left that is now immensely intolerant of dissent and is looking to purge everyone on the “wrong side of history.”

Of course, those who are actually victimized by left-wing mobs and bullies are assumed to be villains, unworthy of even basic civility. For all their language about students being harmed by Shapiro’s tweet, Georgetown Law seemed to have little public concern for how he felt or was being treated by students and faculty.

All are welcome, unless you disagree with the extremely rigid but perpetually morphing tenets of diversity, equity, and inclusion. And this ideology is ruthlessly enforced by an expensive, taxpayer-subsidized administrative apparatus that has mushroomed in our colleges and universities.

Higher education is becoming a mockery of what it once was. Our most prestigious schools now fit a caricature of being the bastion of privileged, unthinking, entirely left-wing elites absorbed with performative, narcissistic displays of offense and grievance.

This campus culture festered for decades and now pervades every powerful institution in the country.

What happened to Shapiro was shameful but at least it shines a light on the deep rot in modern academia, which is increasingly about ideological credentialing and little else.