Woke but Broke: How US Colleges Are Pricing Students, Themselves Out of Business 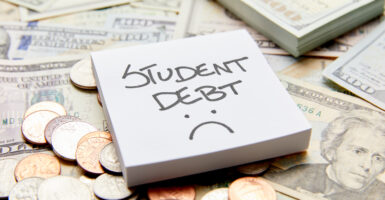 The average price of college has more than doubled since 1980, and nearly 44 million Americans now owe more than $1.5 trillion in student debt, according to a March report from the National Association of Scholars. (Photo: The Crimson Ribbon/iStock/ Getty Images Plus)

Allen Mendenhall is associate dean and a professor in the Sorrell College of Business at Troy University in Troy, Alabama.

Danielle Elizabeth Snell, a graduate of Hillsdale College, is a candidate for a master’s degree in economics at the Sorrell College of Business at Troy University.

Whether their leaders realize or admit it or not, American colleges and universities are on the verge of a crisis. And it’s a crisis, by and large, of their own making.

The National Association of Scholars last month published a report by Neetu Arnold, “Priced Out: What College Costs America,” which finds, among other things, that an undergraduate degree is now prohibitively expensive for many Americans, who have turned to the federal government to subsidize their education.

“The average price of college,” writes Arnold, “has more than doubled since 1980.” She adds that “[n]early 44 million Americans now owe more than $1.5 trillion in student debt.”

That’s a lot of money.

Several factors have contributed to widespread tuition hikes, including university expenditures that, Arnold suggests, aren’t directly related to students or education, but rather primarily to professional administration—that is, to the hiring of more deans and directors and officers to comply with the growing number of federal regulations and accreditation reporting requirements.

That’s just part of the story. The trend of profligate university spending goes back several decades.

After World War II, politicians adopted popular slogans and mantras regarding the necessity of college for all Americans, Arnold explains. The idea, however quixotic, that every citizen deserves a college degree has propelled government spending and set public policy priorities since at least the Truman administration.

The “college for all” narrative motivated passage of the GI Bill, the National Defense Education Act, and the Higher Education Act, which, although designed to make college more accessible, inadvertently drove up the price tag for a university degree.

The ready availability of federal student loans has enriched universities and their administrators on the backs of students, Arnold says. Meanwhile, the quality of education has diminished, and the students are therefore unprepared, or underprepared, for the job market.

Administrators also have reallocated time and resources toward student comforts and amenities, rather than educational rigor and intellectual diversity. However, education, according to Arnold, is “meant to elevate the mind by introducing students to new perspectives and unfamiliar ideas.”

Colleges have become so expensive, she says, in part because they depend on federal money and aid that come with regulatory strings attached. The more government bureaucracy and red tape a university must manage, the more it will spend on compliance officers and offices.

Add to government data tracking and retention of the many reporting requirements of accreditors, and the costs of university administration rise even higher.

Encouraged to take out a massive loan for education that they cannot afford, students burdened by debt delay marriage, family, career, and homeownership to the detriment of society writ large.

Arnold says that “universities raise their prices knowing that students will take out loans to pay for the increased price,” adding that students “will bear the consequences for their own bad judgment, but the university will escape scot-free with the borrowed tuition money.”

But what if universities had “skin in the game”?

As American colleges and universities have grown increasingly radical and progressive in their political messaging and orientation, they have financially exploited the very groups—the poor, ethnic minorities, and first-generation college students—that the left purports to champion.

But these costs fall upon young students.

“Priced Out” proffers several fixes and corrections to the current system, including consolidating duplicate administrative offices and roles, facilitating information transparency regarding federal grants and aid earlier in the college admission process, creating vocational curricular tracks staffed by practitioners, and holding institutions financially responsible for debt incurred by students who do not graduate.

Yet more reform is needed. Arnold’s alarming and comprehensive report is just one small step in a positive direction. Universities that take Arnold’s criticisms to heart and adjust accordingly will likely outperform their competitors in the long run.

Given birthrate declines, diminishing international enrollment, and a growing belief among young Americans that a college degree is no longer worth the price, universities must change.

Elite colleges (e.g., those in the Ivy League), colleges with large endowments, and state flagship institutions will probably weather the storm, as it were, but small liberal arts schools are particularly vulnerable in this climate.

Universities that fail or refuse to adapt and evolve could face a grim future—or, worse, no future at all.