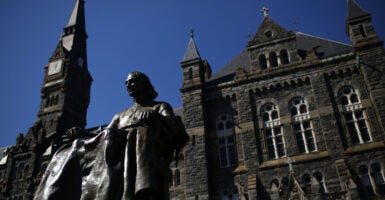 Well, there it is. After four months of “investigation,” Georgetown law professor Ilya Shapiro has finally been reinstated.

In case you haven’t been following Shapiro’s saga, here’s the rundown.

Shapiro, a constitutional scholar who previously worked at the libertarian Cato Institute, was put on indefinite administrative leave in January for a tweet in which he condemned the practice of selecting Supreme Court judges based on race. This was before President Joe Biden’s nomination of Judge Ketanji Brown Jackson.

“Because Biden said he’d only consider black women for SCOTUS, his nominee will always have an asterisk attached. Fitting that the Court takes up affirmative action next term,” Shapiro wrote in his first Tweet.

And here is the one he was put on leave for: “Objectively best pick for Biden is Sri Srinivasan, who is solid prog & v smart. Even has identity politics benefit of being first Asian (Indian) American. But alas doesn’t fit into the latest intersectionality hierarchy so we’ll get a lesser black woman. Thank heaven for small favors?”

Shapiro then wrote on Twitter that the nominee would always have an asterisk attached and that it was fitting the Supreme Court would soon be deciding an affirmative action case.

The now-reinstated law professor later apologized for how the tweet was worded: “I meant no offense, but it was an inartful tweet. I have taken it down.”

The tweet created a full-blown crisis at Georgetown Law School. First, a journalist drew attention to the tweet, then student activists went on the warpath to get Shapiro fired. They conducted “sit ins” on campus and protests.

The school quickly put Shapiro on administrative leave and launched an investigation of the tweets, which apparently took four months to complete. Was the school really spending all those months analyzing the tweets or was it just waiting for the mob to quiet down and the offended students to graduate?

John Malcolm, the vice president vice president of the Institute for Constitutional Government at The Heritage Foundation, said in a statement to The Daily Signal that it’s good Shapiro was reinstated:

I am glad to see that justice delayed is not always justice denied. It is absurd that it took months to ‘investigate’ a hastily drafted and ill-considered tweet. Ilya is an outstanding scholar who will contribute to a robust exchange of ideas, assuming that is still welcome at Georgetown Law School.

Here’s what the Georgetown Law School Dean William Treanor had to say in an announcement of Shapiro’s reinstatement.

To be reinstated, Shapiro will have to undergo training in “implicit bias, cultural competence, and non-discrimination.”

If anyone was made to feel unsafe and unwelcome, wouldn’t that be Shapiro, who was immediately mobbed and perpetually hounded practically from the moment they hired him?

While on leave, Shapiro continued to make public appearances but was accosted by student protesters who screamed at him and made it difficult to speak.

At an event at the University of California, Hastings College of Law in March, students engaged in the heckler’s veto to disrupt Shapiro’s debate with another law professor.

According to the Washington Examiner, “Demonstrators stomped their feet, slammed books and hands on tables, and yelled.” A student shouted, “You’re not welcome here.”

Here’s how Shapiro described the student behavior: “They screamed obscenities and physically confronted me, several times getting in my face or blocking my access to the lectern, and they shouted down a dean.”

The law professor, Rory Little, whom Shapiro was supposed to debate, acknowledged that the students were disruptive and engaged in “physically intimidating conduct,” but then defended them.

“The protest was free speech under any definition; we can argue about duration and decibels,” Little wrote in a letter to The Wall Street Journal. “But let’s be honest: Constitutional law is murky, inconsistent, and unsettled as to what messages and techniques of expression have priority when two conflict.”

A mob is just one of those “techniques of expression,” apparently. Will anyone in a position of authority in higher education ever stand up to students blatantly violating their school’s code of conduct?

As I wrote when this story initially broke, the students attempting to get Shapiro fired and who scream at him when he speaks aren’t snowflakes or victims, they are bullies who’ve showed a contempt for the freedom of speech.

It’s good that Shapiro was reinstated. But it’s a full-blown crisis that anyone who dissents from left-wing orthodoxy in elite institutions is essentially hung out to dry as soon as the mob comes for them.