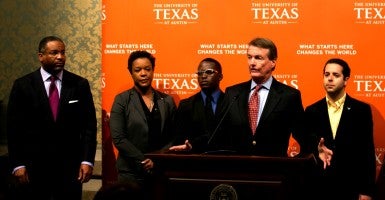 On Dec. 9, the Supreme Court will hear oral argument in a case involving the University of Texas at Austin’s use of racial preferences in admissions.

Though the Court has long accepted the practice of state-run schools factoring race and ethnicity into their decisions about whether to admit students, the justices should consider one of the unintended consequences of these affirmative action policies: Students admitted based on their skin color, rather than their merit, may end up “mismatched” with their school, which leads to low grades and high dropout rates.

>>> For more on this, see Heritage’s Special Report A “Dubious Expediency”: How Race-Preferential Admissions Policies on Campus Hurt Minority Students

The star of the high school basketball team isn’t necessarily ready for the NBA. Kobe Bryant and LeBron James aside, sticking a high school star in a professional basketball league would almost certainly set him up to fail. The skills gap between the professionals and the high school star would soon relegate the talented amateur to the bench. This is the scenario commonly perpetuated by affirmative action policies. Though they may be well-intentioned, these policies put bright, talented students at the bottom of an academic All-Star heap.

Affirmative action-induced low grades are a serious problem—as demonstrated by research over the course of the last decade. For example, in one study of top law schools, more than 50 percent of African-American law students (many of whom had been admitted pursuant to affirmative action policies) were in the bottom 10 percent of their class. And the dropout rate among African-American students was more than twice that of their white peers (19.3 percent vs. 8.2 percent).

As University of San Diego law professor and U.S. Civil Rights Commissioner Gail Heriot details in a Special Report for the Heritage Foundation, there’s a similar dropout rate among students admitted due to affirmative action policies and white students admitted as “legacies” with entering credentials that match those of students admitted because of a race preference.

This highlights the problem of academic “mismatch,” regardless of skin color. When a student’s entering credentials put him or her at the bottom of the class, it should come as no surprise when he or she switches to an easier major, drops out, or fails out. It’s become increasingly clear that affirmative action is doing more harm than good to the very people it is intended to help.

The problem doesn’t stop there. Because of affirmative action policies, fewer minorities enter careers in science, technology, engineering, and math (STEM) fields. This is not due to a lack of talented minority students—of which there are many. As Professor Heriot writes:

[There] are not enough [academically-gifted African-American or Hispanic students] at the very top tiers to satisfy the demand, and efforts to change that have had a pernicious effect on admissions up and down the academic pecking order, creating a serious credentials gap at every competitive level.

Neither is it due to a lack of interest. Study after study shows that minorities tend to be more interested in STEM fields than their white counterparts. But admitting students with lower high school grades and SAT math scores into schools with elite science and math programs is a recipe for disaster. Heriot describes one study conducted by UCLA law professor Richard Sander and UCLA statistician Roger Bolus, which indicated:

[S]tudents with credentials more than one standard deviation below their science peers at college are about half as likely to end up with science bachelor degrees, compared with similar students attending schools where their credentials are much closer to, or above, the mean credentials of their peers.

Thus, students should be encouraged to apply to universities where their credentials are matched with those of their fellow students. Merit-based admissions are a “win-win” situation. Students end up at institutions where they are more likely to graduate and in the field of study they actually want to pursue. A case in point is the race-blind admissions in the University of California system.

In 1996, the people of California passed an initiative amending the state constitution to bar state schools from “discriminat[ing] against, or grant[ing] preferential treatment to, any individual or group on the basis of race, sex, color, ethnicity, or national origin.” Before this amendment went into effect, California struggled with affirmative action-induced high failure rates and low grades. Heriot notes that UC-San Diego, a selective institution topped only by flagship institutions like Berkeley, had only one African-American student with a 3.5 GPA or higher after freshman year in 1997.

Failure rates at state schools were also disappointing, with 15 percent of African-American and 17 percent of American-Indian students in academic jeopardy, as compared with 4 percent of white students. The problem was not that there were no minority students capable of making the UC-San Diego Honor Roll—it’s just that those students were going to places like Berkeley and Stanford, where they too were not on the Honor Roll.

After race-blind admissions went into effect, the media broke into pandemonium. Accusations that Berkeley was now “lily-white” were levied. Yet this was not the case. While minority students did drop from 58.6 percent of the student body to 48.7 percent, white students made up a bare majority, and Asian-Americans came in second at 38 percent. What happened to the other minorities?

At UC-San Diego, 20 percent of African-American students now made the Honor Roll, and failure rates for African-Americans and American Indians dropped to 6 percent. Under merit-based admissions, grades were higher and dropouts were lower, and between 1997 and 2003, 50 percent more African-Americans and Hispanics graduated with a degree in a STEM field. Sadly, in the midst of these successes, the California schools sought new ways to get around the state constitution’s requirement of race-blind admissions.

The Harms Are Clear

The harms of affirmative action are clear. Academic mismatch perpetuates low grades and high dropout rates for minority students who need a racial preference to gain admission. Basing admissions on race rather than merit also contributes to the dearth of minorities in STEM fields. No person should be disadvantaged by the color of his or her skin, no matter how sincere the intentions of affirmative action proponents.

Join us at the Heritage Foundation on Dec. 7 at noon for a discussion of the Fisher case with Gail Heriot, Heritage scholar Hans von Spakovsky, Peter Kirsanow, and James Blumstein. The program also will be streamed on our website.