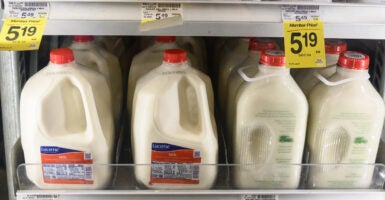 In a new report, the Congressional Budget Office reveals that the current scourge of inflation will likely continue to haunt us for many years to come. Pictured: Milk prices are displayed in a supermarket in Washington, D.C., on May 26, as Americans brace for summer sticker shock as inflation continues to grow. (Photo: Nicholas Kamm/AFP/Getty Images)

Months behind schedule and as many Americans look forward to the holiday weekend, the Congressional Budget Office released its new federal budgetary and economic projections.

The dramatic differences between this update and the CBO’s last report 10 months ago highlight the economic issues that have visited every American household. For example, the CBO is expecting the economy this year to be $4,700 smaller per household.

That gap widens to more than $13,300 in lost personal purchasing power per household through 2031. In just 10 months, the CBO’s estimate of the financial health of America has deteriorated that much. Almost as quickly as Americans earn it, the federal government finds a way to spend it.

Worse, the CBO is now expecting price levels will be another 5.5% higher through 2031 than their estimate just 10 months ago. Forget President Joe Biden’s empty promises, the CBO thinks the current scourge of inflation will continue to haunt us for many years to come.

Cementing these troubles further, the CBO expects real economic growth rates to stagnate between 1.3% and 1.7% from 2024 through 2032. The CBO sees a continuation of our current economic malaise and not a return to the record high jobs and growth of the Trump administration.

Instead, the CBO expects a return to the stagnation of the Obama administration.

With spikes in interest rates now promised by the Federal Reserve, the CBO is expecting 10-year federal interest costs to increase 49% to $8.1 trillion—equivalent to more than $63,000 per household through 2032.

Federal net interest costs then will alone be larger than the economies of all but about 20 countries today. The CBO projects that in 2032 the federal debt will balloon to $40.2 trillion, equal to roughly $300,000 per household.

This debt and interest spiral threatens to saddle our economy for generations to come. They also impose tremendous burdens now, at a time when American families can least afford it. By 2032, the government is expected to take nearly $66,000 per household out of the economy annually.

This represents the total amount that will be taken through taxes and that will be borrowed by crowding out private investment. These are the symptoms of the expected dramatic growth in the size and scope of the federal government.

The CBO projects that the federal government will redirect roughly a quarter of our economy by 2032. The government cannot create resources. It merely takes the things produced by hardworking Americans and redirects them to its own purposes.

These trillions represent more than figures on a page, they represent the hard work of millions of Americans who make things for each other and their families. By 2032, a quarter of that hard work will be needed to cover the checks the government is busy writing with your name on it.

Since the start of the pandemic, the Fed printed money to cover roughly half of the new federal debt. However, the CBO expects that as the Fed continues to focus on fighting inflation, it will reduce its holdings of federal debt by $2.2 trillion through 2025.

The combination of this action and the enormous federal deficits expected during these years will result in $5.6 trillion of federal crowding out of private investment. Instead of being used to build factories and businesses, fill stores shelves, and employ more Americans, that $41,000 per household will be siphoned away.

This crowding out will be equal to 37% of the total amount of private investment that the CBO expects in this period. None of this will be related to some future crisis, and none of it will be building a more prosperous future. The CBO expects this taxpayer-funded feast to be necessary simply to maintain what will then be the “normal” operations of the government.

Perhaps as striking is what the government plans to do with your money. In fact, today, only 29% of federal noninterest spending goes to government services and operations. The rest goes to some form of wealth redistribution.

By 2032, the CBO expects that nearly three quarters of federal noninterest spending (more than 15% of our economy) will go from your pocket to somebody the government likes better.

As horrific as these economic predictions indicate, it begs the question: What if the CBO’s estimates are actually optimistic? Despite the fact that the last real-life update of the consumer price index measured inflation at 8.3%, the CBO is cheerfully projecting the consumer price index to only be 5.1% for this quarter—it’s still drinking the “transitory” Kool-Aid.

In fact, the CBO is expecting inflation to be back below 3% in less than a year. Meanwhile, it expects this quarter to post 4.2% real economic growth. Does the economy feel like it’s currently experiencing outstanding growth rates and falling inflation?

While we all hope for the best, the CBO’s economic assumptions may be unrealistic when compared to the economic realities faced by Americans today.

The federal budget is one reflection of the values of our society. These figures illuminate a federal budget that doubles down on the burdensome expansion of government and the inflation-inducing deficits now crushing down on every American family.

These may be the values of the people currently running the federal government, but are these our values?

The CBO projections are not destiny. Though it shows the path our government is set to walk down, and the cost to all Americans that would bring, we can always choose another path.

As Memorial Day approaches, and as our nation comes together to remember those that sacrificed to protect our rights, our prosperity, and our futures, our government should also honor those sacrifices by allowing Americans to remain free and prosperous.