Congress’ Overspending Is the Problem, Not a Lack of Tax Dollars 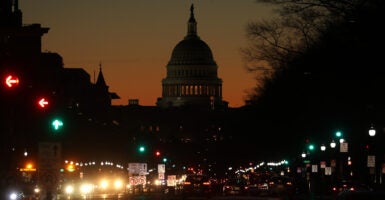 The reason that this eye-popping statistic is higher than usual is the myriad “stimulus” checks distributed by the IRS last year. Those checks more than offset the income taxes paid or withheld from the average American’s paychecks.

Of course, even Americans that ostensibly didn’t pay income taxes are now paying the price for those deficit-financed stimulus checks in the form of 8.5% inflation. And besides the income tax, working Americans—directly or indirectly—pay plenty of other taxes, from the payroll tax to tariffs.

The federal government doesn’t suffer from a lack of tax dollars. Fundamentally, the government has a spending problem.

In 2019, Americans collectively paid more in taxes than they did on food, clothing, and housing combined. And unless Washington changes course, taxes will consume a larger and larger share of households’ budgets in the future.

Over the past decade, the federal debt has nearly doubled to over $30 trillion due to reckless spending by Congress. This is a burden that all Americans share.

There are two real solutions that Congress must enact for a more fiscally sound and economically prosperous country.

First, Congress must address its out-of-control spending. Government spending has increased 266% over the past 20 years compared to GDP growth of only 112% over that same period. The biggest driver has been the growth of entitlement programs.

Over the past 20 years, Social Security spending has grown from $433 billion to $1.1 trillion. Other programs have grown even more rapidly, such as Medicare, which has more than tripled from $217 billion all the way up to $696 billion.

Income security programs increased by more than six times over the last two decades to over $1.6 trillion, making it the largest area of spending in the entire budget in 2021. While some of this growth stems from the pandemic, the trend is true of all major entitlement programs: growth in spending has far outpaced inflation and GDP growth.

Secondly, to reduce the unnecessary burden on the American people, Congress should fix the broken U.S. tax code, which is incoherent and inconsistent. Like a parody of Frankenstein’s monster, the tens of thousands of pages of U.S. tax rules are haphazardly pieced together.

However, since all employers face this tax for paying employee wages, it drives down market wages, leaving workers bearing the brunt of both sides of the payroll tax in the form of lower upfront pay and lower take-home pay.

There are fuel taxes and other excise taxes, death taxes, capital gains taxes, and tariffs, not to mention many burdensome taxes that both state and local governments impose. American workers even bear the brunt of the corporate income tax.

A result of our disjointed patchwork system of taxation is that it leaves most Americans unaware of how much tax they pay or how much those taxes harm them economically.

One of the biggest problems in the current income tax system is the inclusion of hundreds of tax breaks to politically favored entities that distort markets and allow the government to pick “winners” and subjugates others to an uneven playing field.

The winners, all too often, are those with a strong political lobby.

Congress needs to create a neutral tax code and eliminate tax credits and other provisions that give tax benefits to specific political interests or select activities. Doing this will diminish outside influence and allow a more level playing field for everyone, including everyday American taxpayers who lack political influence.

The current tax code may work well for accountants, lawyers, lobbyists, and certain special interests, but it generally doesn’t work well for Americans, rich or poor.

Policymakers should craft legislation that restores neutrality and transparency to the tax code and ensures more equal treatment for all Americans. The tax code shouldn’t be just another tool for people in Washington to exert their influence into all aspects of Americans’ lives and businesses.

Congress should take responsibility for its overspending and the broken tax code it built, instead of asking the American people to pay for Washington’s irresponsible policies.