Taxes Are 1 Plague That Won’t Pass Over Your Home 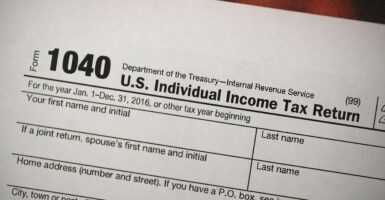 The left's tax plans are designed specifically to make the government the sole decider of what is produced, who benefits from it, and how our economy is shaped—socialism in practice, if not overtly by name. (Photo illustration: Joe Raedle/Getty Images)

As millions of Jews continue to celebrate Passover, a holiday dedicated to the achievement of a free society devoted to the God-given rights of all people, this week also marked the left’s favorite holiday—Tax Day.

Tax Day represents more than the left’s desire to endlessly take the fruits of our labors and expand the government. Its tax plans are designed specifically to make the government the sole decider of what is produced, who benefits from it, and how our economy is shaped—socialism in practice, if not overtly by name.

The double, triple, and intentionally punitive taxation of investment—the engine that drives our economy—is how the left visits this plague on every American household.

By taxing these means of production at high enough rates, and multiple times, it hopes to drive private investment into the ground, leaving only the government in a position to dictate the details of our economy.

President Joe Biden’s proposed tax on unrealized gains is just the latest clear example of the left’s ultimate design. It’s being falsely billed as a tax on only the wealthiest Americans. Biden conveniently hides that the assets in question are the tools that allow us to produce the goods and services that enrich our lives. This is a tax on the work of entrepreneurs and innovators.

Though obscured through layers of complexity, make no mistake, this is a direct tax on none other than the engines of economic production.

Laid out in Biden’s newest budget, this proposal effectively taxes the value a business creates and reinvests to the benefit of society. It’s not a levy on an enterprise’s buildings, trucks, and factory equipment. Rather, it is a tax on the value of bringing these things together in a productive way.

Where a tractor, its fuel, seed, and fertilizer can be random items scattered around a field, when they are skillfully brought together, they can, literally, feed the world. However, these inputs do not last forever.

The tractor, seed, and fertilizer will be used up in the production of the harvest. When the end products of the farm are taxed, their inputs are taxed as well.

So, what happens when Pharoah demands taxes on the whole harvest, including a direct tax on the portion of the harvest planted back into the field?

This is a tax that’s felt twice—once by reducing future harvests and once by reducing the crop the farmer has in hand. This is how an income tax can intrinsically double tax investment.

To this example we add extra layers of taxation on business activity, on investors, on assets—and now, perhaps, on “unrealized gains”—all driving up the tax imbalance against growing the economy and doubling down on the punitive tax on investment.

These are, in essence, punitive taxes on the freedom of Americans to work to build a more prosperous future for themselves, their families, and their communities.

This is exactly what the left wants. As the tax imbalance makes private investment harder and harder, Pharaoh’s fields now have an easier and easier time crowding out the farms of everyone else.

Punitive taxation of investment is, ultimately, a subtle way to reorganize the economy to take the means of production out of the hands of American families and give it to the government.

The freedom to build a future for our families and communities is among the God-given rights recognized by our Founders and enshrined in our values since the time of Moses.

These designs of the left continue to beg the question posed by Cecil B. DeMille when introducing his Cold War-era film on Exodus, “The Ten Commandments”— “Are men the property of the state or are they free souls under God?”

This Passover, as we remember God’s gift of freedom and the ancient plagues that did pass over the houses of the faithful, let’s not forget the plague of socialism that the left wants to unleash.