A Budget Blueprint for Freedom, Opportunity, and Prosperity 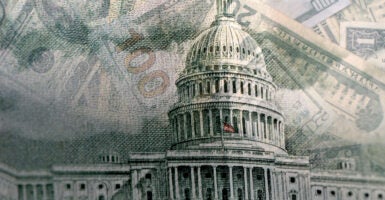 Will we accept more of the Washington-knows-best, top-down rule by politicians and bureaucrats? Or will we the people be in charge?

The current administration and the radical left demands more control over our lives.

Thankfully, there’s a plan to change course and promote the common good by preserving the God-given rights of our people.

Where the federal government does have a constitutional role in education, such as for families of the armed services and students in the District of Columbia, the Budget Blueprint would expand school choice so families have options for the best education for their children.

Providing for the nation’s security is one of Congress’ most important priorities, particularly in an era of great power competition and growing challenges from China. The Budget Blueprint provides specific investments for the Army, Navy, and Air Force, while refocusing resources to the highest-value uses.

The federal government’s two largest programs, Social Security and Medicare, are both insolvent. Worse, both of these programs are outdated and are a bad deal for seniors.

The Budget Blueprint strengthens Social Security, ensuring the program fulfills its original purpose to prevent poverty in old age. It would allow for higher incomes and more opportunity for all Americans by increasing benefits for low-income retirees and gradually reducing benefit levels for new high-income recipients.

An important component of reducing the harm of big government is reducing the damaging burden of taxes. The Budget Blueprint would reform the tax code with an emphasis on fairness and removing disincentives for economic growth.

First and foremost, it would prevent the damaging individual income-tax increases, scheduled for 2026, that would result from the expiration of the Trump tax cuts.

This tax plan would end disincentives to investment by making full expensing for capital investments permanent and for the first time extending neutral cost recovery to new investments in buildings.

The corporate tax rate would be further reduced so that take-home pay for workers can increase.

It would provide all Americans universal savings accounts, allowing savings to grow tax-free, giving families the flexibility to put away money for whatever future needs might arise.

The Budget Blueprint would make the tax code fairer by finally eliminating dozens of harmful and wasteful tax subsidies, such as the deduction for state and local taxes and corporate welfare.

A budget is a reflection of values. Therefore, it’s vital that the federal budget protect American values. The Budget Blueprint would roll back the taxpayer funding that’s currently being funneled to organizations that promote anti-American beliefs and institutions of the professional left, such as the education establishment, public sector unions, and Planned Parenthood.

It also would retain vital pro-life and conscience protections in federal law.

The Budget Blueprint would restore federalism and decentralization, allowing decision-making to occur at levels of civil society and local government closer to the people, reinvigorating the concepts of civic virtue, voluntary cooperation, mutual benefit, and respect for fellow citizens.

The Heritage Foundation’s Budget Blueprint is a comprehensive plan to respond to the threat of federal overspending, by putting the federal government on a path to financial and democratic health and to stability so that freedom, opportunity, prosperity, and civil society can flourish.