Why We Shouldn’t Tax Savings as the Left Proposes 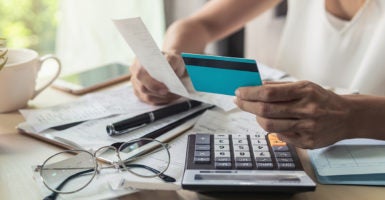 A recent survey found that more than half of Americans have less than $1,000 in a savings account. (Photo: Kittiphan Teerawattanakul/EyeEm/ Getty Images)

The White House is seriously thinking about pushing for new tax cuts to bring added relief to middle class families.

This strategy stands in stark contrast to the approach taken by Democratic presidential candidates, all of whom have, at one time or another, proposed hiking taxes on income, energy, and payrolls as well as adding an entirely new tax on wealth.

Several ideas are under consideration in the Oval Office, including White House chief economist Larry Kudlow’s suggestion of a 15% income tax rate for the middle class.

Another proposal pairs strong political appeal with good economic incentives; it would allow middle class families to put as much as $10,000 each year into a tax-free savings account.

This would address a financial trend that almost everyone agrees is troubling. Americans aren’t squirreling away enough money for a rainy day. One recent survey found that more than half of Americans have less than $1,000 in a savings account, not counting retirement plans like 401(k)s.

Although the first Trump tax cut raised savings rates for families, helping them build bigger nest eggs would give them better protection.

One factor contributing to the shortage of savings for many millions of households is that savings are typically taxed twice: first when the money is put into the account and then again on the interest or capital gain when the money is taken out.

The double taxation provides a greater incentive to spend, rather than save. This punitive treatment of savings leaves Americans more vulnerable to economic downturns and more dependent on federal programs.

Universal savings accounts create the opposite incentive, empowering Americans to expand their nest egg. These simple, flexible accounts would allow every American to save more for the future, and the growth on the savings would be tax-free. They offer a way to fully tap into what Albert Einstein once called the most powerful force in the universe: compound interest.

If young Americans began to stash away even a few thousand dollars a year tax-free into a simple stock index fund (which rises at the pace of the overall stock market), and kept doing that throughout their working lives, by the time they reached age 70, with average returns they could have $1 million or more.

Current high payroll taxes on workers and underfunded entitlement benefits reduce the opportunities and incentives for lower income and middle class families to build their own reserves.

Our hope is that the universal savings account will cultivate a new ethic of savings and thrift in America that will be good for families and society as a whole. Lord knows that the government, with its more than $23 trillion in debt, isn’t going to provide the prudent level of savings we need.

The left’s proposed remedy to the savings crisis–a crisis that government itself helped create–is to charge even higher taxes on private savings and make Americans even more reliant on government programs.

Some, such as Sen. Bernie Sanders, I-Vt., want to raise Social Security benefits, but that can be done only by raising the taxes even higher.

Sen. Elizabeth Warren, D-Mass., who also favors higher benefits, has proposed a higher capital gains tax rate, new financial transactions taxes, new taxes on your bank, and a new annual tax on any investment gains even if you haven’t sold the asset yet.

As a political matter, it’s hard to make a case against universal savings accounts. Families could tap these accounts, without penalty, to pay for emergency medical expenses, school tuition, starting a new business, or buying a home. The plan would add to national savings, not subtract, as most government spending programs do.

Similar savings incentives have proved popular in the past. IRAs and 401(k) plans have been successful savings vehicles. But universal accounts have even greater appeal and reach. These new savings plans would not include all the restrictions on when you can use the money and penalties for accessing the funds early.

Similar accounts have succeeded in promoting saving around the world. The U.K. and Canada pioneered the model of simple, flexible savings accounts to help people save for their own priorities.

Fully 40% of all households in Canada have saved money in these accounts, and more than half of those households are low-income savers. In Britain, 43% of adults hold an account and similar to Canada, 52% of account holders earn less than about $26,000 a year.

Universal savings accounts are a natural fit for President Donald Trump’s populist, pro-growth agenda. The rationale for them is simple: Stop taxing Americans for doing something good; instead, help them save.

When you tax something, you get less of it, and the government’s punitive tax treatment of savings is living proof of that adage. With Universal Savings Accounts, we will tax Americans’ savings less, and we will get more of it.