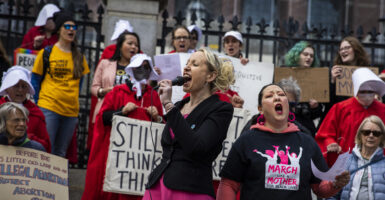 Jeanneane Maxon, J.D. is an associate scholar with the Charlotte Lozier Institute. She is a nonprofit law and compliance consultant based in Dallas, primarily serving pro-life clients and pro-life pregnancy centers.

We could be living in a post–Roe America by the time you go on summer vacation, based on the (egregiously) leaked Supreme Court draft opinion, with the official decision scheduled to be announced within the next two months. While many Americans are preparing to better serve women facing unplanned pregnancies, radical pro-abortion politicians are focusing on making it more difficult for women to receive the care and support they deserve.

The most recent example is the city of Somerville, Massachusetts, a suburb of Boston that recently regulated pro-life pregnancy centers with an ordinance titled “Deceptive Advertising Practices of Limited Services Pregnancy Centers.”

The city council of Somerville is just the latest in a long list of radical pro-abortion legislative bodies that have attempted politically motivated regulations of pregnancy centers, including Maryland, Michigan, New York, Oregon, Texas, Virginia, Washington, and West Virginia, along with municipalities and counties like Austin, Baltimore, and Montgomery County, Maryland.

The sponsor of the Somerville ordinance, City Councilor-at-Large Kristen Strezo, revealed her radical pro-abortion ideology in an interview with The Tufts Daily, where she stated: “I’m really upset that I still have to fight as hard as I do for reproductive justice and abortion access.”

Strezo’s efforts could be described as anti-women, as the very pro-life pregnancy centers that are now regulated in Somerville have been proven to do more than any other organization to meet the specific needs of women facing unintended pregnancies.

More than 2,700 pro-life pregnancy centers, located in all 50 U.S. states and Washington, D.C., provide millions of Americans with high-quality services, usually at no cost, totaling hundreds of millions of dollars’ worth of benefits to their communities each year. Clients of these centers report very high satisfaction rates upward of 97%.

Life-affirming pregnancy centers have a long history (over 50 years) of serving women with compassionate care and enabling them to make a truly informed choice about their pregnancies.

The action taken by Somerville is baffling at best. It is extremely disturbing that a radical pro-abortion proponent like Strezo would feel more inclined to defend her failing pro-abortion ideology than to help women. If these politicians were to look objectively at the state of abortion in America, they would see that abortion is physically, emotionally, and mentally harmful to women.

They would recognize that U.S. abortion policy is extreme when compared to the rest of the world, with the U.S. one of only a small handful of nations that permit elective abortion past 20 weeks (about four and a half months). Fortunately, not every legislative body is as extreme as the City Council of Somerville. At least 20 states have passed resolutions recognizing the valuable services pregnancy centers provide to their communities.

What is more, several courts, including the United States Supreme Court, have issued opinions affirming the legitimacy of pregnancy centers. Some courts have backed up their decisions by awarding pregnancy centers monetary judgements where pro-abortion governing bodies have attempted to unfairly regulate them.

Since 2014, this has resulted in state and local governments paying more than $2.3 million in costly judgments after enacting malignant and unconstitutional regulations targeting pro-life pregnancy centers.

Because a significant number of states are poised to protect life in a post-Roe America, it is more important than ever to support organizations offering help to women in unintended pregnancy situations. The pro-abortion Guttmacher Institute, which was founded by Planned Parenthood, has identified six perceived reasons why women have abortions:

Unfortunately, the women of Somerville will not have this support within their community. In some communities a local pro-life pregnancy center is the only place a pregnant woman can get such comprehensive help.

Policymakers who are truly interested in supporting women and families would do well to examine the taxpayer-funded alternatives to abortion programs that exist in more than a dozen states, including Texas, which provides $100 million over the course of two years to support direct services for mothers and their children from pregnancy through the first years of the child’s life.

Pro-abortion politicians may not care about the true needs of women, but I believe most Americans do. Will you join me in supporting efforts that strengthen and encourage women as they succeed in challenging circumstances?