Post-Roe, Pregnancy Help Centers Will Step Up Their Game 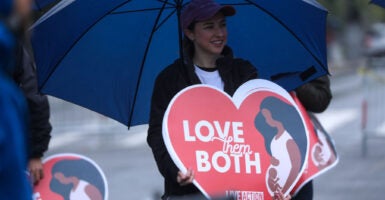 Pro-life advocates demonstrate in front of the Supreme Court on Saturday. "Love them both"—mother and unborn child—is the mantra of many pro-life groups. (Photo: Yasin Ozturk/Anadolu Agency/Getty Images)

Those of us who are pro-life have long prayed for Roe v. Wade to be overturned. Now that that victory could be in sight, we’re as committed as ever to reaching out to women considering an abortion.

In the face of intense pressure from family, friends, their partners, and popular culture, many women feel abortion is their only option in an unplanned pregnancy.

Knowing that, the entire abortion industry has preyed on women for decades, aiming to convince them they aren’t cut out to be moms, that having a baby would interfere with their education or their career, and that abortion would solve their “problem.”

As we celebrate reports of the leaked draft decision from the Supreme Court regarding the possible overturning of Roe v. Wade, we pray the justices stand firm against the onslaught of pressure from the abortion industrial complex.

The overturning of Roe v. Wade would not result in a nationwide ban on abortion. Instead, it would redirect discussion and legislation related to abortion back to the states, because abortion is not specifically mentioned in the Constitution.

It also wouldn’t change the fact that women facing unplanned pregnancies fear abortion is their only option. If that option is curtailed in their states, the fear could rise even more, but there are viable alternatives.

For decades, the abortion industry has lied to women and slandered the work of caring pro-life people who want to help women and protect innocent life.

If it comes down as the leaked report suggested, the pending decision by the Supreme Court in Dobbs v. Jackson Women’s Health Organization gives pro-life people and organizations a more meaningful way to serve women and save lives.

But the decision won’t change the nature of our work. We will celebrate the immense victory and then keep doing what we’ve been doing all along; namely, connecting women looking for solutions to their unplanned pregnancies to the resources and organizations in their communities that exist to help them.

They don’t have to go to an abortion clinic, despite the predatory efforts of the abortion industry.

Our work with pregnancy resource centers helps ensure that when women search online, they find the life-affirming resources available in their own neighborhoods.

And don’t forget to pray for the pregnant woman who feels scared and hopeless. Pray that we can reach her to offer the hope, support, and resources she needs to confidently choose life.