What Biden’s Plans for Title IX Mean for Women, Girls 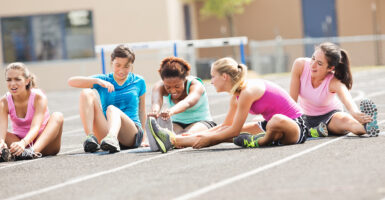 Redefining sex to incorporate gender identity under Title IX will have adverse repercussions for women and girls, not only in athletics, but in other ways as well. (Photo: SDI Productions/ Getty Images)

Feminists this year are celebrating the 50th anniversary of Title IX, the federal law prohibiting sex-based discrimination in any educational program that’s federally funded, either directly or indirectly. But in an ironic twist, the Biden administration is eroding the landmark legislation by redefining sex to mean “gender identity.”

The change, seemingly minor, will have major repercussions, and Sarah Parshall Perry, a senior legal fellow for the Edwin Meese Center for Legal and Judicial Studies at The Heritage Foundation, joins “Problematic Women” to discuss what these changes would mean—and what can be done to stop them.

Also on today’s show, we discuss the Biden administration’s attempt to reinstate the mask mandate for public transportation and the Supreme Court preparing to weigh in on whether a public school employee is allowed to participate in silent prayer in view of students while on the clock.