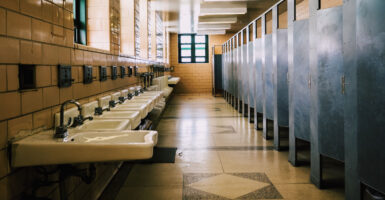 On the 50th anniversary of Title IX protections for girls and women, the Biden administration proposed rule changes in enforcing the law that would have dramatic repercussions for publicly funded schools around the country.

The Education Department released a 700-page document Thursday announcing the proposed changes to Title IX regulations. Perhaps most significantly, the changes would extend the prohibition of discrimination based on sex to include sexual orientation and gender identity.

It’s amazing how at this stage in the history of our republic, sweeping national social and political changes increasingly are made by bureaucratic decree.

The result of the Title IX changes effectively would force all schools that receive federal funding—from K-12 schools to colleges and universities—to conform to a radical version of gender ideology, or else.

Here’s how Sarah Parshall Perry, a legal fellow at The Heritage Foundation, parent organization of The Daily Signal, describes the effect of the rule change:

Any K–12 school or institution of higher education that receives federal funding would have to open its bathrooms, locker rooms, housing accommodations, sports teams, and any other sex-separated educational program or offering to the opposite sex, if those individuals simply claim to be female.

The Biden administration made it clear that it intends to go after schools that don’t comply.

What this means is that the Biden administration effectively is threatening to take away school lunch benefits—intended to feed children of the poor—from schools that don’t comply with the new rules.

The rule change also adds sections redefining sexual harassment to include “sex-based harassment.” This means that, for instance, using the “wrong” personal pronouns for a person identifying as the opposite sex could be considered sexual harassment.

It’s almost surely a violation of the First Amendment right to free speech.

Title IX has been used before to bludgeon free speech. In 2015, a Northwestern University professor triggered a Title IX investigation because he wrote an essay and sent tweets that offended a few students.

The new regulations also would empower K-12 schools to encourage students to go through a gender transition without parental consent, a policy that, according to research, already significantly increases suicide rates among young people.

Schools, if they wish to continue receiving federal money, can’t prevent biological males from using women’s locker rooms or restrooms or from joining sororities. The change effectively ends the concept of female-only spaces in educational institutions.

As Jennifer C. Braceras and Inez Stepman (my wife) wrote recently in The Wall Street Journal: “Out of a single sentence barring discrimination on the basis of sex, the Biden administration is illegally rewriting federal law to erase women and undermine constitutional liberties.”

Although it’s true that many schools have gone far down the road of the new gender ideology, Biden’s Title IX changes effectively would nationalize the trend.

For instance, once the administration’s related rule changes for sports come down, debates about whether biological boys and men can compete with girls and women in sports would be essentially ended by fiat.

This despite most polls showing that the vast majority of Americans oppose allowing biological males to compete in women’s sports.

It’s hard not to see the postponement, presumably until after the midterm elections in November, as more than an attempt to dodge immediate political consequences.

The demolition of women’s sports is coming whether you like it or not. They know you probably won’t like it, so they will do what they can to avoid electoral consequences. What enlightened policymaking.

It’s somewhat ironic that a law designed to increase access to sports for girls and women could be transformed to mandate that men be allowed to invade and derail their genuine competitions and possibly put the health and safety of girls and women at risk.

A recent report in The Washington Stand found that biological males have won 28 college women’s sports titles since 2003, mostly in the past few years. There also has been a big increase in biological males’ taking second- and third-place trophies.

Once the additional regulations come down, the floodgates will be open. Although legal challenges to these Title IX changes inevitably will come, the moves demonstrate the lengths to which the Biden administration will go to enforce its radical social agenda.

But if the Biden administration gets its way, in 2022 the patriarchy benches you.