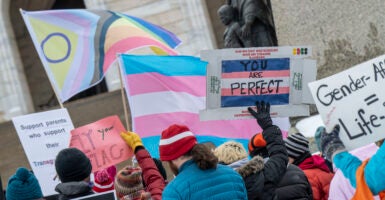 State policies that allow children to access so-called gender-affirming care without parental consent have created a significant increase in suicides, according to a new Heritage Foundation study.

The Heritage study released Monday found that 2020 saw 1.6 more suicides per 100,000 residents ages 12 to 23 in states that allow minors access to puberty blockers and other gender-reassignment procedures without parental consent. (The Daily Signal is Heritage’s multimedia news organization.)

Jay Greene, a Heritage research fellow in education, found little evidence that such procedures prevent suicide. In fact, they may be fueling an increase in suicide among young people, the study finds.

A common argument of those in favor of so-called gender-affirming care is that such medical procedures prevent suicide.

The Biden administration threatened states with a warning that they may be in violation of civil rights law if they put limitations on “gender-affirming care,” which includes hormone treatment, puberty blockers, social affirmation, and surgery.

But the evidence from what Psaki called “every major medical association” is weak. With the transformation of so many institutions into ideological enforcers of causes extremely important to the left, is this a surprise?

Greene’s research found that studies on the issue of gender transition and suicide have been badly flawed. It also found a link between minors receiving puberty blockers without parental consent and a much higher suicide rate.

You can read the report here.

The suicide numbers were obtained from the National Center for Injury Prevention and Control at the Centers for Disease Control and Prevention.

“If making it easier for minors to access puberty blockers and cross-sex hormones is protective against suicide, one should expect the frequency of youth suicide to be lower in states that have a provision allowing minors to get these drugs without parental consent,” Greene writes.

In other words, we should see a divergence toward fewer suicides in states that allowed puberty blockers and other gender hormone treatments after they became available in the United States after 2010.

But the divergence went the other way.

The Heritage study did not find a similar increase in suicide among young adults who would not have been affected by the states’ hormone drug policies.

According to the study, the gap in the suicide rate continues to get larger between states that put limits on access to these treatments and those that don’t. This trend began as soon as the hormone treatments became widely available:

This increase in suicide rates in states where it is easier for minors to access puberty blockers and cross-sex hormones increased at almost the same time, and to the same degree, as those interventions became available. Using Google Trends results for the terms associated with those medical interventions as a proxy for their availability shows that increased suicide rates in states with easier access almost perfectly track the prevalence of those terms.

With so much debate among Americans over transgenderism, the conversation has been contained and controlled by much of the media, Big Tech, and countless other big institutions. They’ve suppressed any opinion or evidence that contradicts the narrative that gender transitioning is an unalloyed good that is opposed only by bigots.

This messaging seems to have created a dramatic increase in young people and children who claim to be transgender.

Liberal talk show host and comedian Bill Maher recently commented that transgenderism for children has become an epidemic. Maher suggested that the spike in cases of children taking puberty blockers and transitioning is connected to explicit cultural messaging.

One recent poll suggested a huge increase in those who identify as trans in just the last few years, with most—43%—young adults and teenagers. Since 2017, according to the Heritage report, the number of young people identifying as transgender has doubled.

“If this spike in trans children is all natural, why is it regional?” Maher asked rhetorically on his late-night show. “Either Ohio is shaming them or California is creating them.”

It appears that this social contagion not only is spreading rapidly but, as the Heritage report finds, causing direct and permanent harm to children at an accelerated rate.