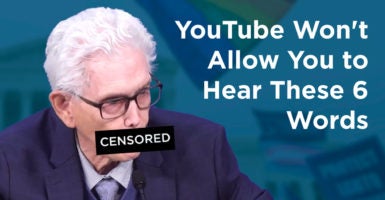 YouTube removed The Heritage Foundation’s video of an event that featured Walt Heyer, who said, “This is a childhood development disorder,” in reference to gender dysphoria in children.

On Oct. 9, Walt Heyer took the stage at a Heritage Foundation event called the Summit on Protecting Children from Sexualization. His powerful testimony captivated the audience. It was so powerful, in fact, that YouTube, a subsidiary of Google, is now censoring his words.

The event, co-sponsored with the Family Policy Alliance, was a half-day of public panel discussions featuring a wide range of speakers. Parental rights groups from across the country attended. Their underlying goal: How to protect children from sexualization in culture, education, and health care.

Like all of its public programs, The Heritage Foundation posted the three-hour event video on YouTube (as well as on other video platforms). Months later, YouTube notified Heritage that it had removed the entire video for violating YouTube’s “hate speech” policy.

Heritage appealed the decision, spoke to Google and YouTube staff, and the video remains censored.

Now Heritage has released a new video from Heyer, who speaks about YouTube’s censorship and why he stands by his words.

This isn’t our first encounter with YouTube censorship. In November, The Daily Signal revealed that YouTube was blocking a video of Dr. Michelle Cretella, a pediatrician who warned about giving puberty blockers to young children.

In the case of Heyer, his comments at the Summit on Protecting Children from Sexualization were meant to raise awareness about the harms of transgender ideology and the push for “gender-affirming treatments,” including hormones and surgeries.

Heyer, who formerly identified as transgender, has spoken at a number of Heritage events and is a well-known authority on the issue of gender dysphoria and transgender ideology.

During the panel, Heyer cited his study of psychology and stated, “This is a childhood development disorder.” He was referring to the phenomenon of gender dysphoria.

Heyer used the term “gender identity disorder,” which is a pre-2013 term for the classification of gender dysphoria as a mental disorder in the “Diagnostic and Statistical Manual of Mental Disorders” (DSM).

Heyer’s six words were about three seconds from an event video that ran more than three hours. YouTube censored all of it.

Hate speech is not allowed on YouTube. We remove content promoting violence or hatred against individuals or groups based on any of the following attributes: Age, Caste, Disability, Ethnicity, Gender Identity and Expression, Nationality, Race, Immigration Status, Religion, Sex/Gender, Sexual Orientation, Victims of a major violent event and their kin, Veteran Status.” (Emphasis added.)

Claims that individuals or groups are physically or mentally inferior, deficient, or diseased based on any of the attributes noted above. This includes statements that one group is less than another, calling them less intelligent, less capable, or damaged.

My colleague Emilie Kao, who hosted the summit, told Google and YouTube representatives that gender dysphoria is classified in the 2013 “Diagnostic and Statistical Manual of Mental Disorders, Fifth Edition,” as a mental disorder. The DSM-5 is “the taxonomic and diagnostic tool published by the American Psychiatric Association.”

Heyer’s comments about gender dysphoria also aren’t unique. This objective characterization of gender dysphoria has been used by the National Institutes of Health, the British Psychological Society, and many scientific and medical journals.

YouTube even has an uncensored video on its platform with a transgender activist doctor who gives a TED Talk about gender dysphoria using similar language. And YouTube hosts a video of someone who identifies as transgender saying the same thing.

“For an issue as complex as gender dysphoria, patients deserve to have viewpoints from all sides,” said Kao, who directs The Heritage Foundation’s DeVos Center for Religion and Civil Society. “YouTube continues to host videos that use the same terms that Walt Heyer did for gender dysphoria, but happen to support hormonal and surgical treatments. They have weaponized their ‘hate speech’ policy to shut out viewpoints they don’t agree with, and the biggest loser in all of this are patients suffering from gender dysphoria.”

As with Cretella’s video that was censored by YouTube, the video of Heyer is not hateful and simply tells the truth about a medical diagnosis of a mental disorder. The video provides both scientific and educational information to YouTube users who might be seeking commonsense responses to a culture that promotes radical and life-altering decisions for young children.

Unfortunately, this is yet another case of YouTube discriminating against an individual and organization because of a particular viewpoint on a subject, rather than because of the content itself. Heyer’s description of gender dysphoria or gender identity disorder is commonly used by medical professionals and organizations around the world.

Even though we presented YouTube with this information and made the case that there was no reason to remove this video, YouTube has chosen to censor it instead.