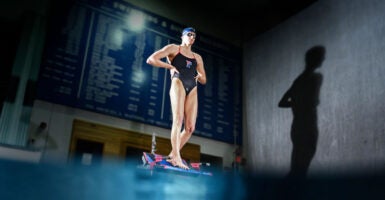 The complaints come despite an increasing number of girls’ and women’s sporting events being dominated by biological males.

The Washington Stand has found that there have been at least 28 separate girls and women’s sports titles that have been won by biological males (or have included biological men as part of a winning women’s team) in the last 19 years, with the trend accelerating exponentially in the past three years.

— Two Commonwealth Championships (2017 and 2019) and one Pacific Games championship (2019) in weightlifting.

In one of the most recent examples, which many are seeing as a symbolically poignant moment that encapsulates the debate over the fairness of biological males competing in women’s sports, two men were pictured kissing each other on the winner’s podium for the women’s ThunderCrit cycling event in London on June 2.

The men had placed first and second in the event, with a biological woman placing third. As reported by The Post Millennial, the male winner of the event had won male cycling competitions “as recently as February” 2022.

A growing number of female athletes are voicing their concerns about letting biological males compete in women’s events. Before University of Pennsylvania swimmer Lia Thomas—who is a biological male who spent three years on the men’s team—won the women’s 500-yard Division I NCAA swimming championship in March, 16 women on Penn’s swim team wrote a letter saying that Thomas should not be allowed to compete women’s events.

“Biologically, Lia holds an unfair advantage over competition in the women’s category, as evidenced by her rankings that have bounced from #462 as a male to #1 as a female,” the letter said.

“After three years of trying and failing to make the basketball team at the University of Notre Dame, finally, my senior year, I earned a jersey and the very last seat on the bench,” she noted. “Had the NCAA made ‘accommodations’ to allow men to compete in women’s sports, I would have never had the opportunity to accomplish my dream of playing for a National Championship. No woman should be forced to sit in the stands because a male takes her spot on the floor.”

Recent poll results indicate that the American public largely agrees with this sentiment. When asked in a poll commissioned by FRC Action if biological males should be allowed to compete against biological females in women’s K-12 and college sports, a significant majority (61%) disagreed, while just 18% agreed.