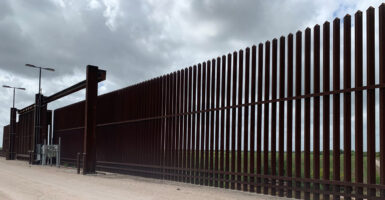 “Actually, when Trump was president, we hardly ever saw an illegal person,” Texas farmer Joe Waite says. “Since Biden was elected, we just see people all the time." (Photo: Fred Lucas/The Daily Signal)

MISSION, Texas—Many of the illegal immigrants who run through a grapefruit farm in the Rio Grande Valley owned by Sharon and Joe Waite aren’t those who feel secure enough to rely on the U.S. “catch and release” policy—meaning the migrants likely have a criminal record, the couple says.

Their 1,100-acre grapefruit farm and cattle ranch has been in Sharon Waite’s family since her grandfather founded it in 1922.

She and her husband Joe have lived on the property since 1988, but have had to adapt to a new flood of illegal immigrants not seen since fencing was erected in 2008 along part of the U.S.-Mexico border.

‘I used to walk around, photographing all over,” Sharon Waite told The Daily Signal during an interview at the couple’s farm.

“I do not do that anymore,” she said. “It’s something I just don’t want to take a risk doing. We don’t know any more who we are going to run into, because you have the got-aways coming through here.”

“Got-aways” is a term used by the Border Patrol to describe illegal immigrants who aren’t caught. With catch-and-release returning as de facto policy under the Biden administration, the bulk of those entering the U.S. illegally have turned themselves into the Border Patrol and claimed asylum.

It’s one reason the Waites have five large dogs, all Akitas, for security.

“People that are going to go through the Border Patrol are being processed to the west of us,” Sharon Waite said. “But the got-aways come through here. We don’t know who the got-aways are. We don’t want to have anything to do with them. I don’t wander around [on the farm] like I used to.”

The Daily Signal interviewed the Waites during a tour of four border counties in Texas sponsored by the Center for Immigration Studies, which advocates enforcement of immigration laws.

According to U.S. Customs and Border Protection, in March the Border Patrol encountered 221,303 illegal aliens along the southern border, a 33% jump from February. Of that total, 28% were individuals with at least one prior encounter the previous year, compared to an average one-year “reencounter” rate of 14% during fiscal years 2014 through 2019.

Illegal immigrants usually have a reason not to turn themselves in, Joe Waite said.

“The Border Patrol says the people that run the fastest to get away are criminals or have a criminal record,” he told The Daily Signal. “We don’t need any of that.”

The situation was worse before parts of a barrier were erected as part of the Secure Fence Act of 2006, signed into law by President George W. Bush.

“The biggest problem is having to be continuously harassed,” Joe Waite said of the illegal traffic on the couple’s farm. “We have in the past—before we had the wall—we had a lot of people come through, a lot of people lost, a lot of women and children lost at night. The wall stopped a lot of that.”

He recalled some of the most violent events that occurred before that on the property:

In 2008, when we had no wall, it was just wild. We had groups of 50s coming through continuously. We found four dead people on our farm in 2008, and we found people that were [fatally] beaten up, terribly. We don’t know exactly why they were killed. But we suspect, and the Border Patrol suspected, when people don’t do what they want them to do, they just kill them.

About five miles of border fencing has been built near the Waites’ farm, which he said has helped slow the incoming illegal immigrants.

Looking over the high point of the barrier from the Texas side, piles of discarded clothing, toothpaste tubes, and other items can be seen on the ground on the Mexico side.

Former immigration officials warn that the situation will worsen if the Biden administration, as the president has promised, drops a Trump policy known as Title 42 that allows border agents to deny entry to illegal aliens because of COVID-19.

“Actually, when Trump was president, we hardly ever saw an illegal person,” he said. “Since Biden was elected, we just see people all the time. Our dogs bark sometimes at night, and we know somebody is going through. It’s harassing us. Our fences get torn down.”

The Waites both say they haven’t had direct problems with Mexican drug cartels, but the cartels facilitate the movement of illegal immigrants into the U.S. and get rich from it.

“The cartels know who we are,” Sharon Waite said. “They know what we do. They know about our family. They monitor our workers. They tried to bribe our workers from time to time to help them out.”