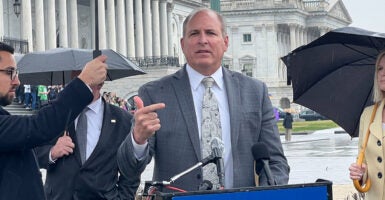 “If you're an illegal alien that has violated the sovereign laws of this country, and you walk up to a Border Patrol agent demanding to be processed and released, you're going to be released,” says Mark Morgan, previously acting commissioner of U.S. Customs and Border Protection. (Photo: Douglas Blair/The Daily Signal)

Their remarks came at a press conference called to respond to the Biden administration’s decision to revoke Title 42, a policy that allows U.S. officials to better control immigration amid the spread of communicable diseases such as COVID-19.

Biggs, R-Ariz., said the Biden administration was willfully exacerbating the crisis at the southern border with plans to revoke the measure on May 23. The move is widely expected to further increase the surge of illegal immigrants.

The Daily Signal reported that in February alone, the Border Patrol had 164,973 encounters with illegal immigrants.

“It’s a reckless decision. It’s a thoughtless decision, but make no mistake, it is a purposeful decision,” Biggs told reporters. “Ending Title 42 will only fuel the current catastrophe that we have at the border right now.”

“You want to stop this? It starts at the top,” the Arizona Republican said. “Joe Biden has to say [to illegal immigrants]: ‘You are not welcome here. You can’t enter our ports of entry illegally.’ And Secretary Mayorkas has got to do the same.”

Mark Morgan, acting commissioner of U.S. Customs and Border Protection during the Trump administration, spoke after Biggs. (Morgan is a visiting fellow at The Heritage Foundation, parent organization of The Daily Signal.)

Morgan described a disconnect between harsh measures such as COVID-19 lockdowns and mask mandates, suggested by medical experts, and the Biden administration’s laxness toward illegal immigrants entering the country.

“If you’re an illegal alien that has violated the sovereign laws of this country, and you walk up to a Border Patrol agent demanding to be processed and released, you’re going to be released,” Morgan said, adding:

It absolutely defies logic, common sense, and the medical science that we’ve been force-fed for the past two years.

The Biden administration disputes that it is allowing unfettered access to migrants who illegally cross the border, and says that once Title 42 is revoked, the Department of Homeland Security will continue to deport illegal aliens.

In a formal statement Friday, Mayorkas said: “Once the Title 42 order is no longer in place, DHS will process individuals encountered at the border pursuant to Title 8, which is the standard procedure we use to place individuals in removal proceedings. … Let me be clear: Those unable to establish a legal basis to remain in the United States will be removed.”

Morgan shared an anecdote about a Border Patrol agent who no longer felt proud of his work owing to the massive influx of illegal migrants and the unwillingness of the administration to resolve the border crisis:

One of my former senior troops met me for coffee the other day. He said, ‘I thought to myself, I now belong to the biggest smuggling organization in the world.’ He has almost 25 years in the Border Patrol, and I could see it in his eyes.

His spirit was crushed. He was broken. He hated that. He was forced to abandon the oath that he swore to uphold. He no longer was proud of his service to his country.

Tom Homan, former acting director of U.S. Immigration and Customs Enforcement and another visiting fellow at The Heritage Foundation, excoriated the immigration policies put in place by the Biden administration. Homan said that even though the new policies were supposed to be more humane, they are anything but.

“In the first year under the Biden administration, more migrants have died on U.S. soil than any time in recent memory,” Homan said. “Over 100,000 fentanyl overdose deaths. Hundreds of minors have died in Mexico. Thirty-one percent of women get sexually assaulted making the journey. Children are dying in the desert across that river. Tell me how these policies are more humane?”

Lora Ries, a senior research fellow for homeland security at The Heritage Foundation, announced that the think tank will open a new Center for Border Security and Immigration, dedicated to researching effective strategies to solve the border crisis.

In a press release issued immediately after the press conference, Ries, director of the new center, said:

The Biden administration has created the worst immigration crisis not just in our lifetimes, but in American history. This crisis has exposed both the left’s open-borders extremism, and how so many of our leaders in Washington have failed to take immigration policy seriously for decades.

This neglect has created the very conditions that the Biden administration has exploited to spark an open-borders crisis and fundamentally change the American electorate via mass illegal immigration.

A reporter asked Morgan whether he had heard any stories regarding ranchers and farmers on the border and their experiences with illegal migrants.

“I heard from a young man who talked about his ranch. His land on the border had been handed down from generation to generation. He was a young guy, young family. He had a wife and a young kid,” Morgan said, adding: “He says that his land is being overrun to such a massive amount that he does not feel safe to leave his own property in the United States.”

“He does not feel safe to leave his wife and kid home alone,” Morgan said. “That’s where we’re at right now”