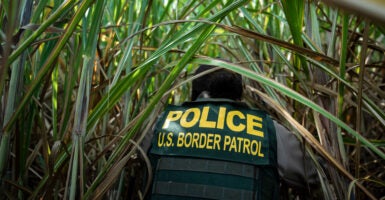 A member of the Border Patrol riverine unit chases illegal immigrants in a field while patrolling the Rio Grande River on Sept. 5, 2019, near Mission, Texas. The Biden administration is making a difficult job even harder for the Border Patrol with its open-borders policies. (Photo: Jabin Botsford/The Washington Post/ Getty Images) 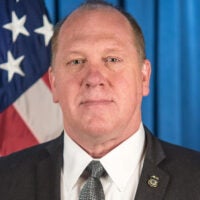 Despite President Joe Biden’s State of the Union call March 1 to secure our border, his administration continues to keep our border open and further neuter immigration enforcement.

It’s become increasingly clear that the Biden administration has a globalist view and is not interested in protecting this country’s borders—or its citizens.

Now, it appears the president wants to fulfill the activist left-wing goal of dismantling the agency of U.S. Immigration and Customs Enforcement, making it impossible to fulfill its mission of enforcing our country’s immigration laws.

Americans should ignore Biden’s words and focus on his administration’s actions.

With 12 consecutive months of shockingly high numbers of illegal alien encounters on our southern border, the Biden administration has simultaneously drastically decreased both detentions and deportations. And fewer detentions of course means fewer deportations.

The Department of Homeland Security’s own data shows that when individuals were only briefly detained, they were more likely to disappear into the interior of the country—3% of those people were actually repatriated, while 12% were granted relief.

Cases involving the rest—a whopping 85%—were left unresolved. Those seeking to end ICE’s ability to detain know that it significantly lowers the chances of deportation, a goal of open-borders advocates.

As part of the Biden administration’s new vision for ICE enforcement—one that aligns with the goals of open-borders activists—DHS is not only avoiding detention, but also gutting effective alternative programs, and turning to “community” outreach programs that amount to “catch and release.”

In a recently issued federal request for proposal, the government announced it was seeking contractors to run a new alternative to detention program—one that would ban the use of monitoring and diminish compliance requirements for 18- and 19-year-olds who are in ICE custody.

All of this comes while record numbers of migrants are being released into the U.S.

This troublesome development signals that the Biden administration may be looking to replace existing programs that have been successfully implemented for nearly two decades with community support services that would require little more than a phone call every three months to monitor migrants’ whereabouts after illegally crossing the border.

The current program, called the Intensive Supervision Appearance Program, utilizes a blend of technology solutions and case-management protocols to help ensure compliance with court dates and hearings. It has a pretty good record of ensuring that migrants appear throughout their immigration proceedings.

However, the most effective way of ensuring an alien is removed after receiving a final order of removal is detention. Since detention funds have a limit, the use of programs such as Intensive Supervision are a necessary element to use along with detention.

The Intensive Supervision Appearance Program already covers the population covered by the new request for proposal, so this new case-management program appears to be a redundant waste of taxpayer money that will eliminate any possibility of ensuring individuals actually adhere to the requirements of their immigration proceedings.

Put another way, the administration seems to be launching a program to “catch and release.” Further, it’s reasonable to wonder whether this program is designed to benefit Biden administration cronies through sweetheart deals, as seen last year in the case of the contractor Family Endeavors.

Why is this administration ignoring the jaw-dropping increase of illegal aliens crossing the southern border, while refocusing ICE programs that will result in high rates of absconding?

In December and January alone, there were more than 330,000 encounters at the southern border.

House Democrats, led by Rep. Alexandria Ocasio-Cortez, D-N.Y., and others in the left wing of the party, are pressing Biden to dismantle ICE and replace its protocols with a catch-and-release programs that rely on illegal migrants to adhere to little more than an honor system.

U.S. Customs and Border Protection data from a year ago shows the agency arrested more than 10,000 illegal immigrants with criminal convictions in fiscal year 2021, a 341% increase over the prior year.

And let’s not forget that every day thousands of unlawful border crossers, known as “got-aways,” successfully sneak into the country. It’s no wonder 13 U.S. senators have written to the homeland security secretary questioning “the mass release of criminal immigrants into our communities under the cover of darkness.”

This administration is taking steps to gut ICE’s effective enforcement tools and replace them with weak alternatives. In his zeal to undo the policies of the Trump administration, Biden has allowed upheaval to fester at the border and indirectly encouraged thousands to risk their lives trying to reach the U.S., knowing there is a good chance they will be allowed to disappear into the interior of the country, even if they are arrested.

If Biden really means what he said in his State of the Union address, he needs to direct DHS to stop dismantling ICE enforcement. Enforcing our immigration laws is a necessary element to securing our border.

Sadly, it seems the president’s words were meant only to affect voting in this year’s midterm elections. That is no way to protect our borders or our citizens.