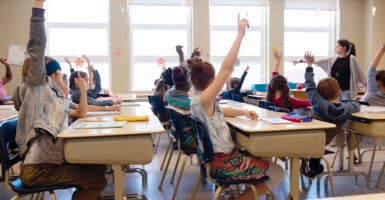 Michael Erickson says his daughter's seventh grade English class was assigned to read a novel promoting a “philosophy that we should just open up the borders.” (Photo illustration: Manonallard/Getty Images)

A Virginia parent says his seventh grade daughter was assigned to read a book meant to “elicit sympathy” for illegal immigrants.

At the end of January, Michael Erickson’s daughter and her classmates were assigned the 2007 novel “Crossing the Wire” by Will Hobbs.

The novel promotes a “leftist-leaning philosophy that we should just open up the borders and take whoever we want,” Erickson told The Daily Signal during a phone interview Tuesday.

Erickson’s daughter, whom he prefers not to name, attends Katherine Johnson Middle School in Fairfax, Virginia, about 20 miles west of Washington, D.C.

When he learned about the reading assignment for English class, Erickson did some research on Hobbs’ novel, which tells the story of 15-year-old Victor Flores and his harrowing journey north from Mexico to cross the border into America.

The novel depicts Flores’ goal as to find work and support his impoverished family. The boy hops trains, stows away in vehicles, and walks miles in the desert.

In his initial email Feb. 1 to his daughter’s English teacher, Erickson said, he took issue with the reading assignment because the novel relays this message: “Mexicans should be allowed to flood over the borders and into America, and we should feel sorry for them.”

Erickson told The Daily Signal that the purpose of the class is to “examine story development, and character development, and structure, and plot.” He added that the course itself is “laudable, just the selection of the book was … outside of what I felt was appropriate.”

Perhaps his daughter and the rest of the class could be “assigned an alternate book assignment to read that is more appropriate?” Erickson asked the teacher.

In reply, he received an email the following morning from the middle school’s principal, Tammara Silipigni, informing him that an assistant principal, Michele Johnson, would talk with him over the phone about the situation.

When Erickson spoke with Johnson Feb. 2, the father requested that the English class be assigned to read a different book.

The assistant principal told him that it was possible for his daughter to be assigned another novel, Erickson recalled, but that the rest of the class would continue reading “Crossing the Wire.”

When he asked Johnson whether other parents would be informed about the novel and given the option of their child reading a different book, Erickson said, the assistant principal said no.

The public school’s curriculum and what’s taught to students are “shrouded in secrecy,” Erickson told The Daily Signal.

Even when his daughter was doing virtual learning at home during the pandemic, Erickson said, her school lacked “transparency on what our children were being taught, which is a real sticking point with me, because except by accident, parents … are never provided an opportunity to understand what their kids are being indoctrinated in and taught, etc.”

Just before publication of this report, Silipigni emailed Erickson Thursday morning and told him that his daughter’s English class had been shifted to a writing assignment while his request for reconsideration of the book assignment moves forward.

Johnson Middle School did not respond to The Daily Signal’s request for comment on Erickson’s account of what happened.

Illegal immigration remains a hotly contested issue for Americans as the Biden administration transports into the nation’s interior tens of thousands of migrants who cross the southern border unlawfully.

U.S. Customs and Border Patrol reports that monthly arrests at the border number in the hundreds of thousands, “a 30-year high,” former State Department official Dan Negrea and James Carafano, vice president for national security and foreign policy at The Heritage Foundation, wrote in a recent commentary. (The Daily Signal is the multimedia news outlet of The Heritage Foundation.)

Unless “media attention is brought to bear” on what is occurring in public schools, “then nothing changes and nothing is affected,” Erickson told The Daily Signal.

“Everybody’s complaints or objections [are] shooed away to the side,” he said, and the schools “continue to storm forward doing whatever they want.”