How the Left Uses Children as Pawns in Immigration Policy 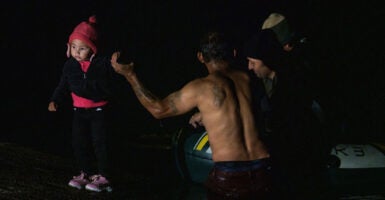 The left is focusing on providing amnesty to illegal aliens who entered the U.S. as children. Far from being fair, this creates a perverse system that turns children into political pawns. Pictured: A child is brought onto the U.S. side of the Rio Grande after being pulled across the U.S.-Mexico border in Roma, Texas, on July 8. (Photo: Paul Ratje/AFP/Getty Images)

Now that the Senate has passed a $1.1 trillion infrastructure bill and the $3.5 trillion “human infrastructure” framework bill, it will now move on to fill in the details of the spending package.

Because amnesty is unlikely to get the 60 votes it needs to pass in the Senate, Democrats are using the wholly inappropriate budget reconciliation bill as a vehicle to jam amnesty through with only 51 votes.

To “limit” the total trillions of dollars spent and to entice senators concerned with the price tag—like Sens. Kyrsten Sinema, D-Ariz., and Joe Manchin, D-W.Va.—to vote yes, Democrats will limit the amnesty to mostly illegal immigrants who entered the U.S. as children.

The (often incorrect) argument for giving children amnesty is that they were brought here by their parents, through no fault of their own, at a tender age. That they know no other country than the U.S. That they are valedictorians and outstanding members of the community. Or that they have been in immigration limbo for too long.

Senators should see through this play on emotions and not only reject amnesty, but go a step further and dismantle the current immigration system that is built based on being a child.

Amnesty is bad policy, regardless of who receives it, because it encourages more illegal immigration. Immigrants not only illegally cross the border between ports of entry, but they unlawfully remain in the U.S. for years (an amnesty unto itself) to await an immigration benefit they have grown to expect—and now demand: a green card.

The left will focus its efforts on Deferred Action for Childhood Arrivals, or DACA, and Development, Relief, and Education for Alien Minors, or the DREAM Act. Both are aimed to provide amnesty to two very different-sized populations of aliens who entered as “minors.”

It must be noted that DACA does not require the child to have entered the U.S. with a parent or other adult. Indeed, many teens enter unaccompanied. The amnesty authors will likely draft the legislation to also include anyone who was “eligible” for DACA, meaning they met the age and other requirements, but either didn’t bother to apply for the benefit previously or were denied the benefit, and will be given another opportunity.

The objective of the DREAM Act is to give green cards to “Dreamers”—illegal aliens who entered the U.S. before turning 19 years old. This population would number in unknown millions, and applications would continue on a rolling basis into the future.

Although current legislation includes an entry date of Jan. 1, 2021, past immigration programs have demonstrated that a fraudulent document easily overcomes a physical-presence requirement.

For both DACA and the DREAM Act, the left’s approach is the same: Those who came to the U.S. as children should get amnesty. It is important that members of Congress vote with their heads and not be persuaded by emotion.

They must ask themselves: Would providing amnesty to past illegal aliens create border security? Would it encourage more future immigrants to come to the U.S. using our lawful immigration system?

The clear answer to both questions is “no.” Instead, a vote for amnesty just perpetuates the cycle of illegal entries and the prolonged unlawful presence to await—and demand—future green cards.

As part of the equation, members of Congress must also include what is playing out before our eyes each day on the border with respect to unaccompanied alien children.

This inhumane phenomenon of unaccompanied alien children is also caused by a law introduced by California Democrats that passed in 2008.

Section 235 of the Trafficking Victims Protection Reauthorization Act recklessly changed the course of U.S. immigration, requiring unaccompanied alien children to be paroled into the U.S., prohibiting them from being placed in expedited removal, and providing them taxpayer-funded guardians ad litem, and numerous other immigration benefits—all because of their unaccompanied child status.

Predictably, the number of unaccompanied alien children subsequently ballooned. Consistent with the left’s dishonest labels, this section of the law is titled “Enhancing Efforts to Combat the Trafficking of Children.” With record numbers of unaccompanied alien children trafficked to the U.S., and traffickers pocketing $14 million a day, this law is an abject failure and it should be repealed.

Now, imagine what leftists will do a few years down the road. They will argue that unaccompanied alien children of today should be given amnesty. This is how they have designed the immigration system. It is perverse, inhumane, and should be dismantled.

Amnesty is bad policy and should be rejected. In the Senate’s current “amnesty through budget reconciliation” ploy, the left is using children as pawns to fulfill its political power agenda.

Members of Congress should consider not only scrapping the immigration provisions in the budget bill, but repealing Section 235 of the Trafficking Victims Protection Reauthorization Act, which—contrary to its name—furthers the trafficking of children.