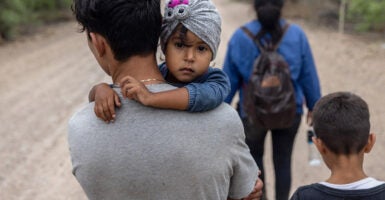 A child looks back toward Mexico after crossing the border into the United States with her illegal-immigrant family on April 14 in La Joya, Texas. Many Central American families who make the arduous journey describe their voyage as harrowing though the length of Mexico, encouraged by President Joe Biden's effectively open borders policy. (Photo: John Moore/Getty Images)

The Biden administration is hoping that if it repeats the words describing its border process as “fair, orderly, and humane” enough times, Americans will begin to believe it.

Never mind what Americans’ lying eyes actually see every day at the border.

The administration this week released its “Blueprint for a Fair, Orderly and Humane Immigration System,” in which it toots its own horn for policy changes it has already made, outlines its next steps, and pushes for Congress to pass mass amnesty through a budget-reconciliation trick.

Americans aren’t buying it and Congress shouldn’t either.

In a Harvard/Harris poll conducted in mid-June, 80% responded that illegal immigration is a serious issue and needs more attention from this administration, and 68% said that the Biden White House is encouraging illegal immigration.

And the border has only grown more chaotic since.

U.S. Customs and Border Protection reported more historically high numbers of illegal immigration encounters at the border for the month of June—nearly 189,000, bringing the year-to-date total to more than 1.1 million illegal immigrant encounters.

Within those numbers is the tragic statistic of more than 95,000 unaccompanied alien children.

But that’s not enough for open borders advocates, and therefore, for this administration. They have been eager to end the Centers for Disease Control and Prevention’s Title 42 public health authority that permits Customs and Border Protection agents to turn away migrants at the border to protect public health during the COVID-19 pandemic.

The Biden White House was on the verge of terminating Title 42 authority, but had to delay such a change due to rising delta variant COVID-19 cases in the U.S.

The administration also extended the bans on nonessential travel across the U.S.-Canada and U.S.-Mexico borders for another month. Yet, illegal immigrants continue to pour over our border from countries with low vaccination rates with the administration’s encouragement and approval.

The inconsistent treatment of American citizens and illegal aliens has been glaring, but the Biden White House poured fuel on the fire this week. As the CDC reversed course, now reissuing mandatory mask-wearing guidance—including among fully vaccinated Americans—details emerged that COVID-19-positive illegal aliens have been permitted to enter the U.S. and are being delivered by the busloads to American communities.

In La Joya, Texas, a concerned resident contacted the police after witnessing visibly ill migrants coughing and sneezing without covering their mouths and not wearing face masks at a restaurant. The police traced the migrants to a hotel full of illegal aliens, put there by Catholic Charities, which received the aliens from the Department of Homeland Security.

Meanwhile, the Biden White House redirects resources away from completing the border wall, which it labels as “needless,” to increase resources at ports of entry.

Although Customs and Border Protection certainly needs more tools at the ports, it’s negligent for the administration to deplete resources from the agency between the ports. With the historic number of illegal migrants and dangerous drugs currently being smuggled into the U.S., it is nonsensical to ignore what happens between the ports.

The Biden blueprint also promises to investigate and prosecute individuals involved in migrant smuggling, human trafficking, and other crimes against migrants.

If the administration would prevent smuggling and trafficking by no longer enticing unaccompanied alien children and family units, ending “catch and release,” and resuming the “Remain in Mexico” program for asylum applicants to await their court date in Mexico, the government would not need to spend such resources on investigations and prosecutions.

The administration is throwing good money after bad.

As Americans witness historic numbers of aliens illegally entering the U.S., the administration is pushing for mass amnesty of unknown millions of illegal aliens who made it into the U.S.

Because Congress can’t get 60 Senate votes in favor of a reckless amnesty, the Biden White House and Democratic leadership are pressuring the Senate parliamentarian to approve using a budget tactic to jam amnesty through with only 51 Senate votes.

Amnesty has no place in such a budget bill. The parliamentarian should reject the ploy, and senators should reject amnesty as a policy. Amnesty only encourages the illegal immigration that Americans see happening at our border every day.

Pay no attention to the illegal immigration and COVID-19 chaos at the border, says the Biden administration. Our border policies are “fair, orderly, and humane,” it says. The White House says so up to 13 times in its new immigration “fact sheet.”

The Biden border certainly isn’t fair to American citizens ordered to stay at home from their jobs and school, and away from family and friends during the pandemic.

Border Patrol agents don’t say the border is orderly. To the contrary, they say they are overwhelmed. And as long as this administration continues to encourage unaccompanied alien minors to come to the border and shower them with immigration benefits due to their status, its policies will never be humane.

This administration’s repeated words don’t pass the laugh test for Americans. It would be funny if it weren’t so serious for America.