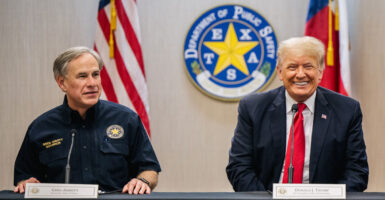 As the Biden administration wastes millions of taxpayer dollars a day by not continuing to build a border wall, Texas is constructing a wall of its own. Pictured: Texas Gov. Greg Abbott and former President Donald Trump discuss the governor's plans to extend the border wall during a June 30 briefing in Weslaco, Texas. (Photo: Brandon Bell/Getty Images)

With President Joe Biden’s administration completely neglecting the crisis at the southern border, states have to step up to secure the nation and keep Americans safe.

To nobody’s surprise, one state doing so is Texas. As the Biden administration wastes millions of taxpayer dollars each day by not continuing to build a border wall, Texas is filling the void and building a wall of its own.

Texas is preparing to award a massive contract to begin building a section of the much-needed border wall, the according to a report from the Washington Examiner.

The Lone Star State’s wall would stretch more than 700 miles long and fill crucial holes that remain after Biden ordered a halt to President Donald Trump’s construction of the wall after taking office in January.

The funding comes as part of a $1.8 billion border security bill that passed the Texas Legislature. In addition to the wall, the bill includes funding for National Guard troops tasked with securing the border.

Gov. Greg Abbott, a Republican, realizing the threat to citizens posed by the border crisis, also has been raising private money for border security, with over $54 million in crowd-funded donations so far.

Because of the dire situation at the southern border, Abbott’s border plan received bipartisan support from state lawmakers. State Sen. Juan “Chuy” Hinojosa, a Democrat who represents the border town of McAllen, threw his support behind Abbott’s plan.

“We must define and protect our borders. We have the right to know who is coming into our country. A country is no longer a nation if it doesn’t defend and protect its border,” Hinojosa said in a public statement.

Hinojosa is exactly right. A nation without borders is no nation at all. This didn’t used to be a partisan statement, but Biden and other leaders of the Democratic Party have made it one.

Hinojosa and Abbott both understand that the current situation, with border crossings at an all-time high, is unsustainable and threatens their state’s way of life. And, while Texas has borne the brunt of the Biden border crisis, it isn’t the only state that has stepped up because of a derelict federal government.

Arizona Gov. Doug Ducey, a Republican who leads another border state, has been harshly critical of the Biden administration’s immigration agenda and has taken steps to keep his citizens safe. Last spring, Ducey declared a state of emergency at the border and recently extended the state National Guard’s mission there for at least another year.

However, it is not just border governors who have taken up the slack for the Biden administration. When Abbott and Ducey called for help, other states across the nation answered the call, sending thousands of National Guard troops and highway patrol officers to secure the border. Even states led by Democratic governors, including Kentucky and Wisconsin, sent troops.

The Biden border crisis affects all Americans regardless of where we live, and governors across the nation have acted promptly to mitigate the effects. In another example, after sending troops to the border this summer, Florida Gov. Ron DeSantis, a Republican, revealed that many migrants were being resettled in Florida and ripped the Biden administration for encouraging lawlessness that threatens the people of his state.

With record numbers of drugs, gang members, and sex offenders coming across the border as a result of Biden’s anti-border policies, it is crucial that states take action.

Thankfully, governors seem to be aware of the present danger and are taking the crisis seriously, even if the current occupant of the Oval Office is not.