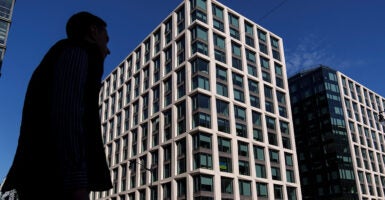 A man walks past the Crossing apartment building in the Navy Yard on April 8, 2022, in Washington, D.C. The building, which was raided by the FBI on April 6, was the home of two men accused of posing as federal law enforcement employees and ingratiating themselves with U.S. Secret Service agents. (Photo: Drew Angerer/Getty Images)

A federal judge granted bail Tuesday to the two men accused of pretending to be federal agents who allegedly bought off Secret Service officers, CNBC reported.

Arian Taherzadeh, 40, and Haider Ali, 36, were arrested in Washington, D.C., on April 6 and have been in custody ever since, according to court documents obtained by the Daily Caller News Foundation. The two allegedly posed as Homeland Security agents since as early as February 2020, buying lavish gifts for members of the Secret Service, including one that was assigned to first lady Jill Biden’s security detail, according to an affidavit.

“In a case like this, release should be the norm,” U.S. District Court Judge G. Michael Harvey said, according to CNBC.

“It’s not a crime of violence. It is a felony, but it is a felony with a maximum period of incarceration of three years,” he added.

If the accused are released, they would have to stay with family in the Washington area with GPS monitoring ensuring they stay there, according to CNBC.

Harvey issued a stay on the decision until 9 a.m. local time Wednesday, giving time to the prosecution to appeal the decision.

Investigators are also looking into the possibility that the accused are tied to the Iranian Revolutionary Guard Corps, a U.S.-designated terrorist organization; Iran’s Quds force; and/or Pakistani intelligence after seizing visas from those countries, according to CBS News.

Harvey dismissed allegations of foreign ties in the case citing a lack of evidence, adding that there was no “suggestion that any foreign government that is hostile to the United States” had involvement, according to CNN.

The U.S. Attorney’s Office declined to comment on the case.

The luxury apartment in Washington, D.C., where the two alleged Secret Service fraudsters lived assured concerned residents that the suspects won’t be allowed back into the building upon their expected release, according to an email obtained by the Daily Caller News Foundation.

“A number of residents have reached out to us since the conclusion of a federal court hearing this afternoon at which two former residents of the building were released from custody on condition of home detention (away from Crossing DC) with GPS monitoring,” the apartment’s management said in the email to residents Tuesday.

The two fraudsters rented apartments in Crossing, a luxury building located in southeast D.C., allegedly for themselves and for the Secret Service officers, according to the affidavit.

Neither suspect is allowed on the property and their access to their old units was disabled, the email stated.

Editor’s note: This article includes the contents of another report filed by the same author.