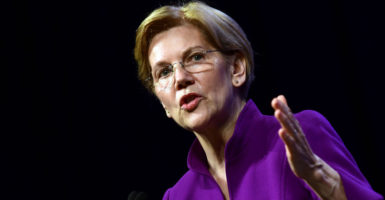 Sen. Elizabeth Warren, D-Mass., was right to backpedal from her speech last week at Dillard University in New Orleans in which she said, “Our criminal justice system” is “racist … front to back.”

But her clarifying remarks at a town hall meeting, following criticism from law enforcement officials in her home state and the U.S. Justice Department, still missed the mark.

In fact, the Senate lags far behind conservative states that have led the nation on criminal justice reform.

All reasonable people agree that racism is an evil that is particularly harmful when backed up with the force of law, as too many people, including Sen. Tim Scott, R-S.C., know too well. Scott has spoken before about his experience of police interactions that leave a “feeling that you are being targeted for nothing more than being just yourself.”

Still, it is simply false that the entire criminal justice system—to the extent that any coherent “system” exists at all—fits that bill. In fact, many conservative states have already led the country on criminal justice reform while the Senate still lags behind.

Even as criminal justice proposals are now being debated in the Senate, too many discrete actors in law enforcement are doing too much good to think that Warren’s comments are helpful or based in reality.

Yarmouth, Massachusetts, Police Chief Frank Frederickson described Warren’s initial remarks as “an insult to the hardworking men and women of the Yarmouth Police Department, as well as other local, state, and federal law enforcement agencies who are part of the criminal justice system.”

Frederickson also pointed out that, in addition to police officers, “there are many district attorneys, judges, probation officers, parole officers,” and others who work in “the system.”

At a town hall meeting back in Massachusetts, Warren later told The Boston Globe that she “spoke about an entire system—not individuals—and will continue to work on reforms to make the criminal justice system fairer.”

“The entire law enforcement system has a lot of good people who get up every day and try to make this a more just, a more fair, more responsive system,” Warren said, and those good people “say over and over, the system needs reform.”

What Warren seems to be missing is that there is no monolithic “system” and no magic bullet to make “it” reform. What the Senate has now is an opportunity to consider discrete reforms that, if passed, would help increase public safety and address rising costs at the Bureau of Prisons by better preparing inmates to return to society as law-abiding, productive members of their families and communities.

But Warren’s remarks are unhelpful on that front.

As the president of the Massachusetts Chief of Police Association, Steven J. Wojnar, wrote to Warren, “Labeling the entire criminal justice profession as ‘racist’ spreads false and damaging information about our members.”

Note the difference: Where Warren decries a “system,” Wojnar sees a “profession” made up of “members”—no doubt many good and a few bad ones, as in any profession.

“As a police chief in your home state of Massachusetts, as well as the statewide association representative,” Wojnar wrote, “I am extremely troubled by this statement.”

Following a 2017 criminal justice symposium co-hosted by the Berkeley School of Law and The Heritage Foundation, former U.S. Attorney General Edwin Meese III and John Malcolm, the vice president of the Heritage Foundation’s Institute for Constitutional Government, wrote that “a balanced evaluation of law enforcement must fully take into account the complexity, diversity, and scale of the criminal justice community in the United States, which consists of 18,000 police agencies and 3,300 prosecutorial agencies, spread throughout 51 jurisdictions, in addition to the federal government.”

Police departments vary in size from one to more than 30,000 officers. More than 765,000 full-time sworn police officers in the United States work alongside prosecutors, defense attorneys, judges, and other court staff, prison staff, social workers, and others who comprise the “criminal justice system.”

“Instances of inappropriate use of force or of racially-biased policing attract a disproportionate share of attention in both the media and the public,” Meese and Malcolm wrote, “but they account for only a minuscule fraction of police-citizen interactions and are not representative of the profession of policing as a whole. What is clear is the necessity to address each instance of misconduct in a fair, thorough, and careful manner. A balanced, thoughtful approach to addressing law enforcement challenges today is needed.”

A Heritage Foundation special report on policing observes the “undisputed fact that throughout much of this nation’s history, police were often tasked with enforcing racist laws and sometimes enforced laws in a racially discriminatory manner, which has left an indelible impression in some communities.” But, the report also notes, “the concept of broad ‘systemic racism’ in law enforcement is a damaging, false narrative that undermines public support for policing.”

That includes more than 200 current and former law enforcement leaders from all 50 states and all political stripes who make up the Law Enforcement Leaders to Reduce Crime & Incarceration, which advocates criminal justice policies that increase public safety.

Rep. John Rutherford, R- Fla., a former sheriff, supported reforms to federal prison policies in the FIRST STEP Act, which the House passed in May by a vote of 360-to-59, because they are “actually about reducing crime.”

Rutherford said that too often when a prison sentence ends, someone “who might be the most incorrigible, disruptive inmate” returns to a crime-ridden community, “and we wonder why these individuals failed and went back to a life of crime.”

“This FIRST STEP Act recognizes the importance of following up an arrest with good correctional programming and attempts to change behavior before sending them back to the community,” Rutherford said. “Failing to have a therapeutic model within your correctional facilities” means “setting these individuals up for failure.”

As a former deputy sheriff, Mississippi Gov. Phil Bryant said, “I’ve been out there with the worst of the worst. I put a lot of people in jail.” Yet he supports prison reform policies around mental health and drug abuse, working with faith-based organizations and “getting [prisoners] jobs, getting their driver’s license, [and] keeping them connected with their families so that they have something to work towards when they’re getting out of prison.”

The Senate currently has a chance to consider similar reforms at the federal level.

But any categorical denigration of “our criminal justice system”—which would include current and former law enforcement officers who are leading reforms in Georgia, Louisiana, Mississippi, Ohio, South Carolina, Texas, and other states—as racist is unhelpful.

On criminal justice reform, it is the Senate and not the police that is behind the curve.