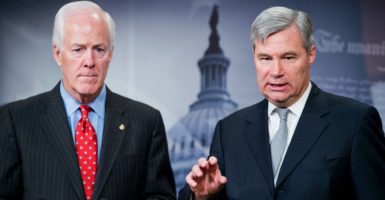 A prison reform bill being considered in the U.S. House of Representatives embodies good policy for American taxpayers, families, and communities.

The House Judiciary Committee voted 25-5  last week to pass the FIRST STEP Act of 2018 (H.R. 5682) out of committee, sending it on to consideration on the House floor.

Building on the Prison Reform and Redemption Act of 2017 (H.R. 3356), Reps. Doug Collins, R-Ga., and Hakeem Jeffries, D-N.Y., co-sponsored the FIRST STEP Act to incentivize federal prisoners to become better equipped to support themselves and their families before they return to society.

The bill would enhance public safety by increasing the availability within federal prisons of activities that have been—and would continue to be—evaluated to most effectively reduce recidivism, including faith-based mentorship, job training and work programs, education, victim impact classes, and family relationship-building programs.

The FIRST STEP Act calls for prison wardens to partner with nonprofits, institutions of higher education, and private entities to provide this much-needed programming.

The bill would require an assessment of each inmate’s risk of reoffending during the prison intake process, and it would provide incentives for all eligible offenders to successfully participate in and complete those recidivism reduction programs.

Incentives would include more time to talk to and visit with family members, mentors, and religious leaders; receiving as much as 15 days of earned time credit for every 30 days of successful participation in a program, to allow inmates to spend more of their sentence in some form of community supervision or home confinement; and possibly to transfer to a correctional facility closer to an inmate’s home, a move that would make restorative family visits more feasible than they often are now. (The average prisoner is incarcerated 500 miles from his or her home.)

While the bill offers a number of carrots, it also comes with a few sticks, in the form of penalties for violations of program or other prison rules.

The bill also lists a number of criminal offenses—including many violent crimes, sexual abuse of a minor, and offenses related to biological or chemical weapons—that would disqualify inmates from receiving time credits for participation in any programming.

Yet last week’s committee hearing revealed two diametrically opposed approaches to the bill: Rep. Steve Cohen, D-Tenn., voted yes, “not wanting the perfect to be the enemy of the good,” but Rep. Jamie Raskin, D-Md., voted no, wanting “the first step to be the best step that we can take.”

Jeffries, the bill’s co-sponsor, acknowledged support for other criminal justice initiatives—most notably, sentencing reform—among some Republicans and Democrats, but with respect to prison reform, he said, “we can begin to come together” and seize “a moment where we can take a first step toward meaningful change.”

Jeffries said that the bill would help prepare inmates “to be job-ready upon release” and “significantly reduce the risk of recidivism in a way that will benefit them, their families, their communities, and the American taxpayer.”

Rep. John Rutherford, R- Fla., said the FIRST STEP Act “is not about being soft on crime.”

“This is actually about reducing crime,” he said.

A former sheriff, Rutherford said that the end of a prison sentence too often means sending someone “who might be the most incorrigible, disruptive inmate” right back into a crime-ridden community, “and we wonder why these individuals failed and went back to a life of crime.”

“This FIRST STEP Act recognizes the importance of following up an arrest with good correctional programming and attempts to change behavior before sending them back to the community,” Rutherford said, and “failing to have a therapeutic model within your correctional facilities” means “setting these individuals up for failure.”

In his 2004 State of the Union address, President George W. Bush said that “America is the land of [the] second chance, and when the gates of the prison open, the path ahead should lead to a better life.” In 2008, Bush signed the Second Chance Act into law, thereby authorizing re-entry programs, which have since enjoyed bipartisan support.

In his first State of the Union address, President Donald Trump urged Congress to pass bipartisan prison reform legislation. Now, a meaningful prison reform package is pending in the House.

As Collins said at last week’s committee hearing, it’s important that lawmakers do not look at this bill “as a piece of paper,” but remember that behind this bill are “people who need a chance at redemption.”

“Yes, we can argue about how far we want to go” on criminal justice reform, Collins continued, but prison reform can be “the first step” to help strengthen communities and reduce crime.