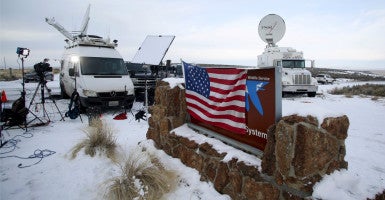 A group of protesters occupied a federal building located on the Malheur National Wildlife Refuge. The FBI is leading the response, but former federal law enforcement officers say the agency is taking a "wait and see" approach, which differs from previous standoffs in Waco, Texas, and Ruby Ridge, Idaho. (Photo: Jim Urquhart/Reuters/Newscom)

Americans remembering the deadly confrontations at Waco, Texas, and Ruby Ridge, Idaho, in the early 1990s are likely to see a different response from law enforcement officers monitoring protesters at a federal building in Oregon, former federal officials say.

On Saturday, a group of militants took over an empty building on the Malheur National Wildlife Refuge, located south of Burns, Ore. The protesters, who are armed, gathered in the Harney County town earlier in the day to oppose the five-year prison sentences of ranchers Dwight and Steve Hammond, who were convicted of arson after they set fires that spread to federal land in 2001 and 2006.

Since the protesters, now formally known as “Citizens for Constitutional Freedom,” took over the building, the FBI has kept its distance, saying that it’s monitoring the standoff and hopes to bring about a “peaceful resolution to the situation.”

Those watching the occupation at the Malheur National Wildlife Refuge shouldn’t expect to see much more from federal law enforcement, according to retired government officials, who attribute the FBI’s “wait and see” approach to lessons learned from past standoffs at Waco and Ruby Ridge.

“The FBI has learned some very painful lessons during the time period I was there and otherwise very painful lessons on the need to negotiate until the cows come home, especially on grazing land,” Clint Van Zandt, the FBI’s former chief hostage negotiator, who served with the agency for 25 years, told The Daily Signal.

After the confrontations between federal law enforcement and extremists at Waco and Ruby Ridge, which took place in the early 1990s and resulted in the loss of more than 70 lives, the federal government was criticized for its handling of the situations.

The events of the 1992 incident at Ruby Ridge began after Randy Weaver brought his family to his cabin in the town after refusing to show up to court for weapons charges. U.S. marshals had been monitoring Weaver and went to arrest him at the remote cabin. Federal agents, along with Weaver, his friend, and Weaver’s 14-year-old son engaged in a firefight. A U.S. marshal and the 14-year-old were killed. An 11-day standoff ensued, during which a sniper with the FBI shot and killed Weaver’s wife in an attempt to shoot Weaver and his friend. The two men eventually surrendered.

During the 1993 incident in Waco, agents with the Bureau of Alcohol, Tobacco and Firearms attempted to raid a compound belonging to a religious group called the Branch Davidians and its leader, David Koresh. The government believed the group was compiling illegal weapons. ATF agents attempted to raid the compound, but were unsuccessful. The FBI tried to end what became a 51-day standoff by tear-gassing the compound, but the Davidians started a fire that resulted in the death of more than 70 members of the religious group, including nearly two dozen children.

In the wake of the two incidents, Van Zandt said the FBI has placed more of an emphasis on negotiations to avoid using force.

“That’s something the FBI has learned, that it’s far better to negotiate than to use the tactical option, which is always on the table,” he said. “In this situation, there’s no need to try to match force with force. There’s no need to try to push those protesters out of there because someone can make a mistake. One person can intentionally or unintentionally fire a shot, and you don’t know what that’s going to lead to.”

In an interview with The Daily Signal, Nate Catura, president of the Federal Law Enforcement Officers Association and a special agent with the government for 25 years, said the events at Waco and Ruby Ridge have shaped the government’s response to the occupation of the refuge.

“The response, it’s just wait and see, not such an assertive approach,” Catura said. He continued:

They’re doing the right thing. They’ve learned from past incidents that there are ways the government can tackle these problems without firing a shot if they don’t have to. In this case, the advantage goes to the government because there isn’t anyone in harm’s way.

“This is a group of people that want to make a political statement,” Catura said of the protesters. “They feel the government has wronged them in some fashion, so this is their way of calling attention to what they feel are perceived wrongs.”

Before “Citizens for Constitutional Freedom” took over the federal building, approximately 300 citizens and members of the group gathered in Burns on Saturday to protest the government’s charges against the Hammonds.

Dwight Hammond and Steven Hammond set fires in 2001 and 2006 that spread to federal land, and were convicted of arson in 2012. The Antiterrorism and Effective Death Penalty Act, which governs the penalty for arsons committed on federal property, sets the mandatory minimum for the crime to five years.

The judge in charge of sentencing the Hammonds believed five years didn’t fit the crime, and he sentenced Dwight Hammond to three months in prison and Steven Hammond to one year and one day.

However, the trial court’s sentencing was reversed by the 9th U.S. Circuit Court of Appeals, which upheld the federal law. As a result, the appeals court imposed the five-year sentence on Dwight and Steven Hammond in October, giving credit for time already served. The father and son quietly reported to a California prison Monday.

Among the protesters occupying the federal building on the Malheur National Wildlife Refuge is Ammon Bundy, son of Nevada rancher Cliven Bundy. The elder Bundy gained notoriety last year during a standoff with the Bureau of Land Management.

In interviews with various media outlets, Ammon Bundy said the group plans to remain on the land until it is returned to private ownership, and he indicated they’re prepared to stay for several years.

“This is not a decision we’ve made at the last minute,” he told The Oregonian.

Bundy and his fellow protesters have not indicated how many are involved with the occupation—a decision, he said, to protect “operational security”—but media reports suggest there could be at least 100 among their ranks.

During a press conference yesterday, Bundy told reporters the purpose of the protest is to “restore and defend the Constitution.”

Though the FBI and other federal law enforcement agencies are taking a measured approach and, according to media reports, have not had a presence on the land, Bundy’s brother, Ryan, told Oregonian reporter Ian Kullgren he is prepared to “kill and be killed if necessary.”

When asked about his brother’s statement, Ammon Bundy said the comments were “taken out of context.”

A representative from the Joint Information Center established by the Harney County Sheriff’s Office could not confirm whether federal, local, or state law enforcement has had a presence on the land surrounding the building.

Van Zandt, the former FBI hostage negotiator, told The Daily Signal he would expect to see the FBI or other federal law enforcement continue to work toward a peaceful resolution, regardless of Ryan Bundy’s comments.

“From my perspective, based upon from what I know, there’s no reason right now to consider any type of tactical resolution, that this is something that should be resolved by negotiations, and if it breaks down, it won’t be because the FBI and the government doesn’t try to resolve it peacefully.”

The FBI hasn’t given specific details as to their plans for dealing with the standoff, saying in its statement it is taking the safety of law enforcement and those inside the federal building into consideration in doing so. However, Van Zandt told The Daily Signal that his experience leads him to believe it’s likely the agency is engaging in negotiations with the group.

“You really need to be the velvet-covered brick in situations like this,” he said. “Law enforcement can always eventually win out in any type of an armed confrontation with citizens.”

This story was updated to include additional information about the events at Ruby Ridge and Waco, and the Hammonds’ prison sentences.