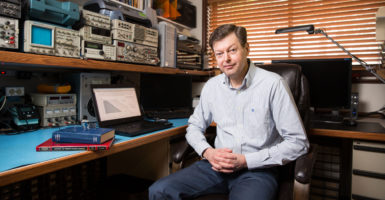 Mats Jarlstrom’s trouble all began with a red-light camera.

In April 2013, Jarlstrom’s wife, Laurie, received a ticket after driving her Volkswagen through an intersection in Beaverton, Oregon, that was equipped with a traffic camera.

His wife paid the fine, but the timing of the traffic lights at the intersection piqued Jarlstrom’s interest, so he decided to look into a formula created in 1959 to calculate the length of yellow lights.

Jarlstrom says he realized the original formula failed to take into account the extra time it takes for a car to slow before making a right-hand turn safely.

“Currently, people are getting tickets for running red lights because they’re slowing down when they’re making turns,” he tells The Daily Signal. “It’s a safety issue because any time we run a red light, we’re in the intersection for the wrong reason, and there is cross traffic, and especially pedestrians are in danger.”

Jarlstrom, an electronics engineer from Sweden, revised the formula to take the deceleration into account, and decided to take his findings public.

But doing so, he quickly learned, came with a risk, and a costly one at that.

Jarlstrom shared his findings with local media, policymakers, the sheriff, and Alexei Maradudin, who helped craft the original mathematical formula in 1959. He also emailed his theory to the Oregon State Board of Examiners for Engineering and Land Surveying, in hopes it would take a look at his research.

The Oregon panel said it didn’t have any jurisdiction over traffic lights. But it did have jurisdiction over the state’s engineering laws. And it decided to open an investigation into Jarlstrom because of “his use of the title ‘electronics engineer’ and the statement ‘I’m an engineer,’” according to an order from the board.

After investigating Jarlstrom for two years, the board fined him $500.

Jarlstrom, according to the board, practiced engineering without a license each time he “critiqued” the traffic-light system and identified himself as an engineer in correspondence with the panel.

“You don’t need to be an engineer to understand this,” Jarlstrom says in an interview with The Daily Signal, adding:

I read something that was already public and understood it, and I wanted to share that information with the public talking about it. I felt completely shocked when I contacted them that they weren’t interested in listening to the problems that I presented to the board. They accused me of being illegal by saying I was a Swedish electronics engineer.

Jarlstrom paid the $500 fine, and the board closed its investigation. But now, the public-interest law firm Institute for Justice is fighting alongside the Oregon man in federal court to challenge the state’s engineering laws.

Jarlstrom does have education and experience in engineering.

Jarlstrom, 56, also worked for Luxor Electronics before immigrating to the United States in 1992.

But in Oregon, anyone who engages in “creative work requiring engineering education, training, and experience” under the state Professional Engineer Registration Act is required to be licensed as a professional engineer.

Nearly every state requires professional engineers to have a license. However, those licenses typically are reserved for engineers who build skyscrapers or design electrical plans for buildings.

The Institute for Justice is challenging the vague definition of what constitutes a professional engineer in Oregon, which in effect allows the board to regulate the exchange of ideas and of the word “engineer,” Gedge says:

What makes Oregon so unusual is they’ve taken the licensing regime for professional engineers and are applying it to people like Mats, who are talking about issues that concern them. That’s unusual.

There are two issues for Jarlstrom, Gedge says: He used the word “engineer” to describe himself, and he talked about technical topics.

“That word isn’t off-limits to people,” he says. “The laws can’t be used to stop people from sending an email to his sheriff for safety.”

Indeed, Jarlstrom’s experiences with Oregon’s Board of Examiners for Engineering and Land Surveying aren’t exclusive to him.

Last year, the board opened an investigation into Allen Alley, a Republican gubernatorial candidate, who stated in campaign ads: “I’m an engineer and a problem solver.”

Alley received a bachelor of science in mechanical engineering from Purdue University and worked as an engineer for Ford and Boeing. But he isn’t a licensed professional engineer in Oregon.

The board’s investigation into Alley is ongoing.

In another instance, the panel investigated a woman profiled in Portland Monthly’s “Oregon Woman 2015” edition.

Included in the magazine was an article about Marcela Alcantar and a headline about “the incredible story of the engineer behind Portland’s newest bridge.”

The board opened a “law enforcement case” against Alcantar based on the line, since she wasn’t a registered professional engineer.

Ultimately, the case was closed after the board’s staff spoke with the journalist who wrote the article. The board determined “engineer” was a designation given not by Alcantar, but by the article’s editors.

“The definition of the practice of engineering is so broad according to the board, and the board has shown itself to be so aggressive,” Gedge says. “Expressing your concerns on technical topics certainly leaves you at the risk of being investigated.”

Although Jarlstrom ultimately paid the fine, he says he believes the board’s decision violated his freedom of expression.

And while he does have engineering experience, Jarlstrom contends the skills he used to craft his revised formula relied on 6th- and 7th-grade math:

It’s interesting that just because students here in Beaverton or elsewhere are using math and looking at some traffic-flow issues in school, they would be considered practicing engineering according to the board. We can’t have laws having that kind of power or overreach.

Jarlstrom says he considers himself a whistleblower and is surprised something like this could happen in the United States. But he vows to continue working to “improve our civil rights and freedom of speech so individuals like myself can share ideas, whether they’re good or bad.”

“We still need to be able to express them,” he says. “If we can’t, there won’t be any ideas to choose from.”