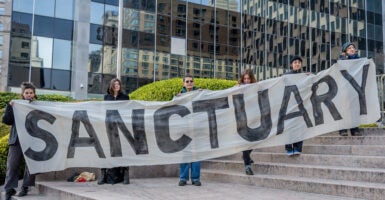 The Biden administration has appointed an immigration judge in New York with an activist past, including criticizing federal immigration agents as “just guys who are walking around with guns calling themselves law enforcement.”

She also routinely used Twitter to attack the Trump administration’s immigration and border security policies, drawing the ire of a top House Republican.

The Justice Department announced that Immigration Judge Carmen Maria Rey Caldas would begin hearing cases last month after a two-year stint as U.S. legal director at the International Refugee Assistance Project in New York. That group organizes law students and lawyers to develop and enforce legal and human rights for refugees and other displaced individuals.

Before that, Rey Caldas worked as a lawyer for several left-leaning immigration advocacy groups.

The judge will be a “rubber stamp” for Democrat policies that undermine immigration enforcement, said Rep. Elise Stefanik, R-N.Y., chairwoman of the House Republican Conference.

“Judges should stand for the rule of law, but Judge Carmen Maria Rey Caldas’ activist past has proven she will not enforce our nation’s immigration laws,” Stefanik told The Daily Signal in a written statement, adding:

No one who has spoken out against immigration enforcement, degraded ICE officials, or encouraged noncompliance of federal law enforcement should serve as an immigration judge, but Judge Rey Caldas has done all three. She will be nothing more than a rubber stamp for Democrats’ far-left agenda that has already created the worst border crisis in our nation’s history and made our communities more unsafe.

“It’s an arbitrary deportation force. They have no police authority. It has no investigative authority,” Rey Caldas said on NY1, adding:

They are a civil force. They are not—the protections that would normally be attached to police involvement don’t attach here. These are just guys who are walking around with guns calling themselves law enforcement. But there are none of the legal protections attached.

During the same TV program, she advised against cooperating with ICE agents, since they serve only administrative warrants and not court warrants.

“Someone comes to your door, no matter what they say, just don’t open the door,” she said. “If they are police officers and they have an actual warrant, they’ll kick the door down.”

In May 2019, she tweeted: “Every day, thousands of New Yorkers are fighting back against the Trump Admin, as they try to crush immigrants with the full force of federal government. As a NY’er, @NYCMayor needs to stand with us and NOT increase NYC’s cooperation with ICE. #not1more.”

Such sentiments are troubling from an immigration judge, said Jon Feere, chief of staff at Immigration and Customs Enforcement from 2017-2021 and now director of investigations at the Center for Immigration Studies, which advocates immigration controls and enforcement.

“She has been an activist that has been so openly hostile to law enforcement and shows no respect to the men and women that are trying to enforce our nation’s laws,” Feere told The Daily Signal. “She is entering this job seeming to think we should release as amhy illegal aliens as possible.”

In December 2019, Rey Caldas tweeted: “The Trump administration has enacted policy after policy aimed at eviscerating the legal rights of people seeking #asylum and engineering inhumane conditions to exacerbate their suffering.”

The Justice Department’s Executive Office for Immigration Review appointed Rey Caldas as an immigration judge March 25, along with 24 other judges around the country.

Immigration judges are administrative judges who are employees of the Justice Department, not the independent judicial branch, and don’t require Senate approval.

Among decisions made by immigration courts are whether an illegal immigrant may remain in the United States or will be deported, and whether an asylum claim is legitimate.

Congress is considering legislation to move immigration courts outside the Justice Department and give them more independence. However, conservatives argue that change could mean less accountability and more inefficiencies.

Before Rey Caldas worked at the International Refugee Assistance Project in New York, she was co-director of the Safe Harbor Clinic, a project of Brooklyn Law School that helps immigrants gain legal status in the U.S. through asylum claims and immigration courts. She held this post from 2018 to 2020 while working as an assistant professor at the law school.

From 2015 to 2018, Rey Caldas was director and deputy director of the immigration intervention project at Sanctuary for Families in New York, which addresses domestic violence incidents.

Feere argued that Congress should consider oversight of the Justice Department’s appointment of immigration judges, so the executive branch doesn’t have such wide latitude.

“Congress should consider the discretion it gives the executive branch,” the former ICE official said. “We have an administration now that is fundamentally opposed to enforcing immigration law, and we end up with what we see now.”