4 Key Facts About ICE, and What Could Happen If It’s Abolished 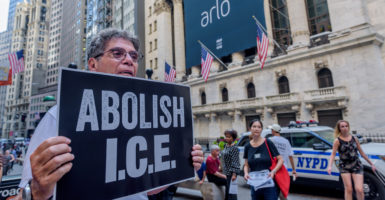 A protester with the group Rise and Resist shows his sentiment Aug. 2 during four days of protests in New York's financial district. (Photo: Erik McGregor/Sipa USA/Newscom)

U.S. Immigration and Customs Enforcement officials on Aug. 14 arrested and deported an illegal immigrant who is wanted in El Salvador on murder charges.

While Immigration and Customs Enforcement in recent years has had to contend with “sanctuary” policies by cities and counties that protect illegal immigrants, the agency now faces a push by some in Congress to abolish it.

President Donald Trump is scheduled to honor ICE agents Monday at a White House event, even as many congressional Democrats call for restraining or ending the agency that enforces immigration law throughout the nation’s interior.

The House adopted a resolution last month supporting ICE agents, but 167 Democrats refused to vote for it.

President Trump’s blanket directive to round up and target all undocumented immigrants underscores the unchecked power which ICE has used to terrorize our communities. From conducting raids at garden centers and meatpacking plants, to targeting families outside churches and schools, the president is using ICE as a mass-deportation force to rip apart the moral fabric of our nation.

Sadly, President Trump has so misused ICE that the agency can no longer accomplish its goals effectively. As a result, the best path forward is this legislation, which would end ICE and transfer its critical functions to other executive agencies.

Sen. Kirsten Gillibrand, D-N.Y., and New York Mayor Bill de Blasio are among Democrats who have said they support getting rid of ICE.

Just 25 percent of voters say they are for abolishing the agency, according to a Politico/Morning Consult poll released last month.

Trump has fired back in defense of ICE.

“Leading Democrat politicians have called to abolish ICE—nobody even believes it, they want to abolish ICE,” Trump said last month. “In other words, they want open borders and more crime, and that’s what you’re going to get. You’ll get more crime as you open up those borders.”

Primarily an immigration enforcement agency that doesn’t operate on the border, Immigration and Customs Enforcement still performs other functions. Here are four major facts about ICE, and what could happen if it ceases to exist.

If ICE were abolished, minority communities would be disproportionately harmed, said Matthew T. Albence, the agency’s executive associate director for enforcement and removal.

“These minority communities are the primary victims now, because these individuals are involved in gang activity and other criminal activity and generally they commit those crimes against those in the same communities in which they reside,” Albence told the Senate Judiciary Committee on July 31.

His remarks came in an exchange during a hearing when Sen. John Cornyn, R-Texas, asked: “What if we just decided to abolish ICE? What would be the impact on our country in terms of public safety?”

What in effect you are saying if you’re getting rid of the interior enforcement arm of immigration enforcement, you’re saying you want border security, you want Border Patrol to make all these arrests and stop people there, but once they get by the Border Patrol, let them go.

Before 9/11, naturalization of legal immigrants and enforcement of immigration laws were under one agency—the Immigration and Naturalization Service, or INS.

When Congress created the Department of Homeland Security in 2003, it established ICE as the enforcement arm while U.S. Customs and Immigration Services would be in charge of naturalizing legal immigrants.

The 9/11 Commission noted that terrorists involved in the 2001 attacks exploited U.S. immigration rules and some of the hijackers violated the terms of their visas.

A third arm of Homeland Security, called U.S. Customs and Border Protection and including the Border Patrol, is responsible for stopping illegal immigrants from entering the country. Trump will honor that agency’s work Monday as well as ICE’s.

In fiscal year 2016, the last full fiscal year of the Obama administration, the agency made 77,806 arrests. Although removals were higher that year—240,255—ICE asserts that was “largely attributed to the decline in border apprehensions.”

The arrests during fiscal 2017 included 127,000 illegal immigrants who were charged or convicted of crimes inside the United States, according to the White House. 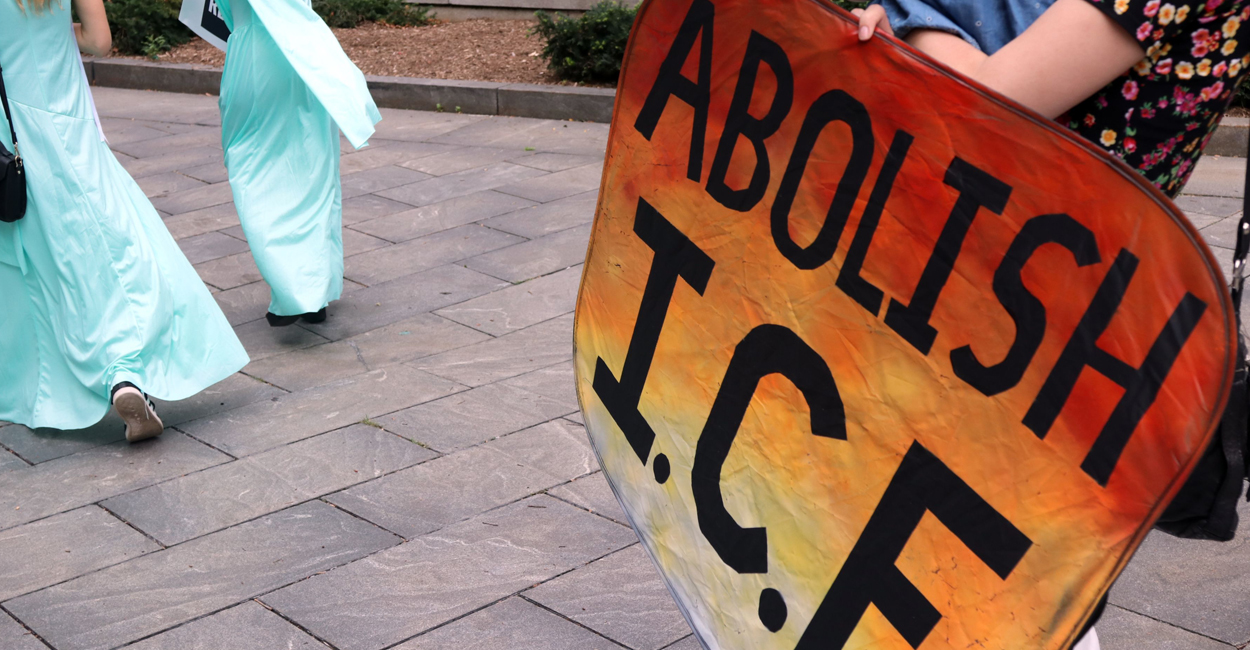 This is a prominent sign Aug. 3 as demonstrators in New York support Therese Patricia Okoumou, a Congo native arrested July 4 after she trespassed at the Statue of Liberty to protest Trump administration immigration policies. (Photo: G. Ronald Lopez/Zuma Press/Newscom)

“ICE also conducts investigations for violations under the federal criminal code for things like visa fraud, naturalization fraud, passport fraud, [and] alien unlawfully in possession of a firearm,” Dan Cadman, a former INS and ICE agent, told The Daily Signal.

“Do other agencies also handle some of this work? They do, but there are never enough law enforcement officers to handle all of the violations,” Cadman, now a fellow at the Center for Immigration Studies, a pro-enforcement think tank, told The Daily Signal. “Disbanding ICE would diminish the already finite pool of federal agents available.”

Abolishing ICE doesn’t have a clear endgame, he said, since it seems pointless to transfer functions or create a new agency to do the same things.

“Is it in fact just an end-around, to try and be sure that there is no agency available to do the things that Congress and the law as written require?” Cadman asked, adding that he suspects that is the case.

In a move unrelated to what some Democrats are pushing, 19 ICE special agents last month signed a letter to Homeland Security Secretary Kirstjen Nielsen asking that ICE be broken into two separate agencies.

One would focus on enforcement and removal while the other would focus on investigations, intelligence gathering and fraud, human trafficking, and dismantling gangs.

Immigration and Customs Enforcement also combats the smuggling of people, drugs, money, counterfeit merchandise, and weapons into the United States. This includes confronting sexual trafficking, and in some cases, fighting child pornography.

ICE made more than 11,000 arrests related to weapon offenses in fiscal year 2017, according to the White House.

The agency is also responsible for “repatriation of cultural treasures,” or returning expensive items stolen from another country.

It targets the human smuggling chain immediately beyond the smugglers themselves. This includes overseas recruiters and organizations, fraudulent document providers, and transportation and employment networks that benefit from human smuggling operations.

During fiscal 2017, ICE made more than 5,000 arrests related to sexual assaults and more than 2,000 related to kidnapping.

It also apprehended more than 76,000 people for offenses involving dangerous drugs, according to the White House. Agents seized more than 980,000 pounds of narcotics, including 2,370 pounds of fentanyl and 6,967 pounds of heroin.

Increased enforcement on all these fronts is key, said Ira Mehlman, spokesman for the Federation for American Immigration Reform, which advocates enforcing current law.

“Any enforcement agency is only as good as the politicians running it,” Mehlman told The Daily Signal. “If you’ve got an agency of law enforcement professionals, it’s still the political bosses that decide to implement or not implement the law.”

ICE also specializes in identifying dangerous individuals before they enter the United States, or finding them after they illegally enter.

The agency’s Counterterrorism and Criminal Exploitation Unit is comprised of two divisions: the Terrorist Tracking and Pursuit Group and the Student and Exchange Visitor Information System Exploitation Section.

The terrorist tracking group coordinates with other Homeland Security agencies to identify those who overstayed or otherwise violated their visas.

The student and visitor section investigates foreign nationals here for educational purposes who could be involved in criminal or terrorist activity or in intelligence gathering for a foreign power.