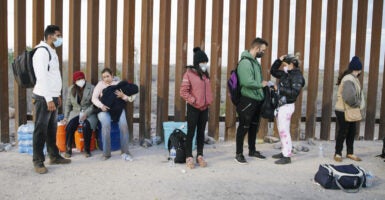 The simple question for Congress to ask is: Would creating a new immigration court fix the problem? Clear answer: no. Pictured: Asylum-seekers from India, Cuba, and Colombia wait Feb. 22 next to the border wall with Mexico for processing by the Border Patrol in Yuma, Arizona. (Photo: Katie McTiernan/Anadolu Agency/Getty Images)

In a move that will prove to be all smoke and mirrors, the House Judiciary Committee is set to consider a bill that would displace immigration courts and their parent agency from the Justice Department and create an independent court outside the executive branch.

Although touted as a way to cut down on bureaucracy and politics and instead ensure swifter justice, the structure created by HR 6577—the proposed Real Courts, Rule of Law Act—would prove ineffective when paired with the stagnant immigration enforcement wing of the federal government and be crippled by its own growing pains.

Let’s put aside the legitimate constitutional questions of replacing the authority granted to the U.S. attorney general with an Article I court outside the executive branch. This restructuring is both ill-conceived and ill-timed, and could serve only as the metaphorical straw that finally breaks the back of our immigration system.

The notion of an immigration court unattached to the executive branch is not new. The National Association of Immigration Judges, a union, has lobbied for this position in an attempt to move outside the auspices of the Justice Department. This effort intensified in 2017, as the courts’ parent agency, the Executive Office for Immigration Review, attempted to introduce performance metrics as a method of tracking case efficiencies.

The renewed push comes from the misguided notion that moving the courts outside the Justice Department would speed up their efficiency and somehow be the lynchpin to unclogging the more than 1.5 million cases pending before immigration courts nationwide. Numerous reasons exist for that backlog, as my colleagues Cully Stimson and Giancarlo Canaparo argued here, and ways also exist to radically eliminate that backlog, as they opined in their research.

The simple question that Congress should be asking is: Would creating a new court fix the problem?  The answer is clear: no.

Although judges would face new rigors in the hiring process, including some positions requiring Senate confirmation, the bill provides for continuity in court rules and existing precedent, at least until new ones could be established.

Without drastic changes to immigration court practice, including limitations on continuance, it is unrealistic to suggest that this proposed restructuring will produce additional efficiencies in the process.  If anything, the move would provide the opposite.

As a matter of practicality, any restructuring, especially one this bold, would take time to implement. During a phased-in implementation, it is unclear how the courts would continue to function at all. Instead, the immigration court system could experience a virtual work stoppage for a period while the transition, even if only on paper, is in process.

In a larger sense, the idea that this restructuring would bring about some great awakening in immigration reform and swift justice lacks merit. In drafting the bill, Congress failed to recognize that you can’t fix a system where not all components are acting in accordance with the law.

In this context, the government agency charged with immigration enforcement, the Department of Homeland Security, repeatedly has demonstrated since the Pekoske Memorandum of Jan. 20, 2021, immediately suspending removals, that enforcement of our nation’s immigration laws would be scrutinized and disregarded.

In recent months, memos from Homeland Security Secretary Alejandro Mayorkas and Immigration and Customs Enforcement continue to erode our immigration enforcement procedures. One such memo suggests that ICE’s trial lawyers, the prosecutors representing the government in immigration court, may not be needed to appear in court for many hearings.

Meanwhile, after an immigration judge’s order of removal is final, those orders go unexecuted as the Department of Homeland Security has demonstrated no ability, willingness, or—more recently—directives to follow through on the court’s actions.

In its recently published annual report, ICE touted its approximately 59,000 removals in fiscal year 2021 as an accomplishment. For comparison, since 2014, immigration judges have ordered over 379,000 aliens removed in absentia (for failure to appear for a scheduled hearing). This doesn’t include any alien who presented an application, was denied, and ordered removed, or who appealed and subsequently was ordered removed.

Legislative action to restructure the court itself would be meaningless if it met this level of indifference in immigration enforcement.

The House Judiciary Committee has held a hearing on the bill and now will mark it up, debating amendments as the Biden border crisis continues to rage. As we wait for Customs and Border Protection to release yet another month’s worth of border encounters to add to an already staggering figure for this fiscal year, reform and restructuring of immigration courts is nothing more than a misdirected, tepid response.

Instead of using its oversight authority to review the government’s many misapplications and instances of sheer disregard for immigration law in the past year, Congress is looking to trade one bureaucracy for another. Although rampant abuse in processing at the border is matched with toothless immigration enforcement priorities in the interior, Congress is looking to further grind the system to a halt.

This bill isn’t immigration reform. It won’t make the border more secure, close loopholes easily exploited in our immigration laws, or move this country in the direction of ending the Biden border crisis.

Supporters herald HR 6577 as reform, but in reality the bill is a bureaucratic solution in search of a problem.