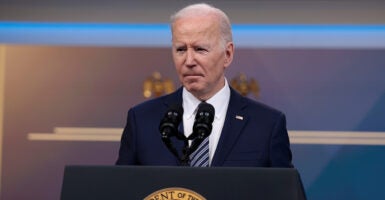 President Joe Biden should prioritize American energy independence and end reliance on adversaries such as Russia, Venezuela, and Iran, 27 state financial officers say in a letter Tuesday to the president.

In their letter, they urge Biden to consider the consequences of foreign energy dependence for U.S. businesses and consumers.

“Policies implemented during the last year thwart the vitality of American energy production,” the financial officers’ letter to Biden reads. “The rising cost of fuel, coupled with precipitous inflation has, and will, continue to result in dire consequences for working-class families.”

The 27 state-level officials are part of the State Financial Officers Foundation, a nonprofit that promotes free-market, fiscally responsible public policy through its network of financial officers, auditors, and treasurers.

Long before Russia’s invasion of Ukraine, gas prices in the U.S. had been on a rapid upswing as a result of decisions to cancel the Keystone XL pipeline, freeze new oil and gas leases on federal lands, order the cessation of drilling in Alaska, and promulgate anti-oil and gas rulemaking from the highest levels of government. Russia’s invasion of Ukraine has only intensified the consequences of already failing energy policies and highlighted the need to re-establish American energy independence.

The state financial officers’ letter denounces Biden for his demands to counter climate change, which they say would force markets to change faster than innovation allows.

The Biden administration should encourage and invest in traditional energy industries such as oil, gas, coal, and nuclear energy instead of focusing only on green energy options that many American families can’t afford, the financial officers argue.

“Most Americans cannot afford to purchase an electric vehicle or equip their home with a full set of solar panels, and many in rural America need traditional fuel to run the trucks that service their farms and help feed their communities,” they write. “The American people urgently need cheaper oil and gas and this administration has the power to make this happen.”

“As Americans across the country are grappling with rising inflation and paying more for gas than ever before, the time for action from President Biden and his administration is now,” Kreifels said in a press release. “Americans should not have to bear the burden of Biden’s anti-energy agenda.”