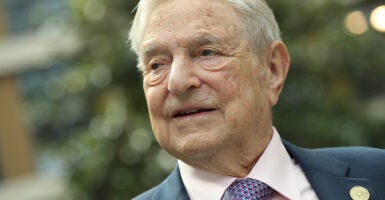 The Open Society Foundations, the philanthropic group founded by George Soros, announced Monday that it would pledge $220 million toward initiatives focusing on racial equality in the United States.

The investment will transform the efforts of political and civil rights groups across the country and comes as protests continue nationwide over the death of George Floyd while in the custody of Minneapolis police, The New York Times reported.

Of the $220 million, $150 million is allocated for groups “that helped to create and now sustain the momentum towards racial equality,” according to a press release from the Open Society Foundations. These groups include the Black Voters Matter Fund, Repairers of the Breach, and political organizations like the Equal Justice Initiative. The money will be given out in five-year grants.

The remaining $70 million will be given as local grants to groups supporting changes to policing and criminal justice, according to The New York Times. The money will also be used to promote civic engagement across communities and political engagement from younger voters.

“It is inspiring and powerful to experience this transformational moment in the racial justice movement,” said Patrick Gaspard, the president of the Open Society Foundations.

For decades, our founder George Soros and we at Open Society have supported the movement against systemic racism. Today, we build on this history by announcing $220 million to build power in Black communities and promote bold new anti-racist policies. https://t.co/6G7yZsc1cm

“We are honored to be able to carry on the vital work of fighting for rights, dignity, and equity for oppressed people,” Gaspard added.

Soros has donated billions to liberal and progressive causes throughout his later career, often supporting the efforts of marginalized people across the world, The New York Times said.

Soros survived the Nazis’ occupation of Hungary before emigrating to the United Kingdom in 1947, according to the foundation’s website.