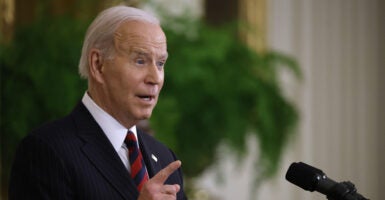 The president thinks that if you don’t want children to receive life-altering chemical treatments based on an ideological definition of gender, you’re “hateful.”

The Department of Health and Human Services recently released an order that said it would be adding federal protections to ensure “transgender youth receive the care they need.”

During a video commemorating the “Transgender Day of Visibility” and the HHS order, President Joe Biden lashed out at states that are looking to prevent “care,” as the cultural left defines it, from being extended to children who believe they are not the biological sex they were assigned at birth.

“The onslaught of anti-transgender state laws attacking you and your families is simply wrong,” Biden said. “This administration is standing up for you against all these hateful bills. And we’re committed to advancing transgender equality in the classroom, on the playing field, at work, in our military and our housing and health care systems.”

In addition to the HHS order, the Justice Department put out a memo to state attorneys general putting them on notice for lawsuits if their states go ahead and prevent “gender-affirming care.”

“Intentionally erecting discriminatory barriers to prevent individuals from receiving gender-affirming care implicates a number of federal legal guarantees,” the Justice Department memo read. “State laws and policies that prevent parents or guardians from following the advice of a healthcare professional regarding what may be medically necessary or otherwise appropriate care for transgender minors may infringe on rights protected by both the Equal Protection and the Due Process Clauses of the Fourteenth Amendment.”

So, what is “gender-affirming care” according to the White House?

Jay Richards, a Heritage Foundation fellow who focuses on marriage and religious liberty, explained what the administration wants from a White House fact sheet:

As Richards then explained, the hormone therapy and surgeries could involve “literal castration for boys and double mastectomies and hysterectomies for girls.”

Trying to stop this is “hateful” apparently.

Biden’s transgender initiative is expressly a shot at Texas and other states that have or are considering bans on these procedures for children.

It demonstrates just how culturally extreme the “mainstream” of the Democrat Party has become. Remember how just a little over a decade ago, President Barack Obama said that marriage should be between a man and a woman?

He evolved—conveniently when polls on the issue changed—and so has the left, which now can’t even really say what a man or woman even is.

The left is all in on the idea that being a man or a woman is a social construct, that men can and should compete in women’s sports if they identify as women, and that children should take life-altering drugs if at any moment they feel like they are not the sex assigned at birth.

The left now demands that the law, from the top down, enforces this evolution of ideas.

Corporate media, always eager to promote Democrat narratives, portrayed the recent White House initiatives on transgender issues as Democrats protecting people from right-wing culture war. The Associated Press wrote in its “news” report that the Biden administration’s order was done in response to a Republican “broader push to stoke culture wars” ahead of elections.

As always, when Democrats push for radical, culturally transformative policies, the media treats it as if they are just doing it to protect basic rights for something everyone already knows is true and correct.

If you haven’t caught on to this game, you aren’t paying attention.

Make no mistake: What the Biden administration is doing is culture war in the extreme.

It’s clear that gender reassignment for children is a hotly contested issue. There is a sharp divide among Americans over whether a person can stop being the sex assigned at birth.

The only group that overwhelmingly says it believes a person can change their biological sex is left-wing Democrats. Particularly, white Democrats with a college degree. For the most part, it’s an article of faith among the woke ruling class, but not at all among Americans more broadly.

This is doubly reflected in how Big Tech companies deeply restrict discussion about the transgender issue. Opinions that fall outside gender ideology of the left, including ones based on data and research, are often disallowed on Big Tech and corporate platforms.

The left and all the elite institutions under its control desperately want to assert that the debate is over. In reality, it’s far from over. Voters and legislators across the country are now putting limits on how much this particular brand of gender ideology can be foisted on children in particular.

With its new HHS order, the Biden administration is signaling that it is for the cultural revolution, and that you will accept its faith, or else. This can’t be an issue left to the American people to decide, the extreme left-wing position on gender must apply to children, and it must be enforced.

If pushing back on this kind of radicalism is the “culture war,” then so be it. The culture war is upon us coming from the left and its allies in the White House whether you like it or not.

The good news is that a willingness to fight back in that culture war is looking like a much bigger tent than the left counted on.