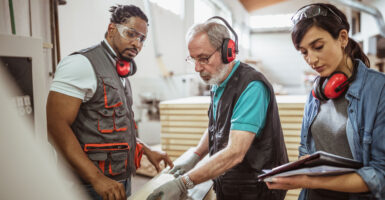 The federal government spends about $18.9 billion annually on all employment and training programs intended to help people who have fallen on hard times get back into the workforce. (Photo: NoSystem Images/E+/Getty Images)

The House Education and Labor Committee on Tuesday will be voting on a reauthorization of the main federal funding for employment and training programs, the Workforce Innovation and Opportunity Act.

Unfortunately, this Democratic draft would move the workforce system in the wrong direction. Instead of making sure employment and training programs get the results that unemployed Americans need, the bill would spend billions more on left-of-center priorities, including boosting union sway and further limiting state flexibility.

The U.S. has a record 11.3 million open jobs. During the COVID-19 recession, the workforce participation rate plummeted. In real terms, there are nearly 4 million more people on the sidelines, mainly because of welfare-without-work policies, where people can earn more from government checks than they can from working.

And yet, the federal government spends about $18.9 billion annually on all employment and training programs intended to help people who have fallen on hard times get back into the workforce.

But just spending money won’t make the programs work. The reality is that if we want our work-capable neighbors to move off of the sidelines, the pathways to work have to be effective. They’re not now.

In a 2019 report on the overall effectiveness of these government training programs, the White House Council of Economic Advisers concluded that “government job-training programs appear to be largely ineffective and fail to produce sufficient benefits for workers to justify the costs.”

Recognizing that tracking inputs only has significant flaws, there was a significant reform movement over the past 15 years to improve the effectiveness of federally funded social programs.

The 2014 reauthorization of the Workforce Innovation and Opportunity Act is one of the most significant examples of congressional reauthorization that aimed at improving data collection.

In this reform, Congress moved federal employment and training programs to an evidence collection and performance management model through a common performance accountability system with six commonsense metrics, such as whether someone got a job and their earnings after six months.

But even this best effort at collecting performance data hasn’t worked. When independent audits investigated how local workforce boards are implementing the data collection, they found that the performance measures weren’t working the way Congress intended.

When a 2021 Vermont audit compared the performance results to the reality on the ground, it found that the programs weren’t serving the population that needs it the most.

Most concerningly, it found that many participants ended up unemployed or actually had lower earnings after the workforce training than before they started.

There were worse results in Florida. A 2018 Tampa Bay Times investigation found that local workforce boards had significantly misreported on their measures and “local offices took credit for finding jobs for thousands of people who never sought help.”

We can’t just collect data. There’s a better way to get results; namely, pay only for programs that produce the specific outcomes we want.

Under the new contract incentives, the percentage of individuals retaining jobs at 90 days doubled and 180-day retention more than quintupled.

Our current workforce system is making bold promises with good intentions. Now, the Democrats want to spend billions more, but the bill they’re voting on won’t get the results that unemployed folks on the sidelines desperately need.

It’s time for our workforce system to be built around clear principles that would transform federal social programs by only rewarding programs that succeed in bringing real outcomes in the lives of vulnerable individuals.

In short, it’s time to pay for outcomes.